Even though I am in the northernmost state of the United States, and even though I was expecting to see amazing things this summer in Alaska, for some reason I wasn’t convinced that I would be seeing the Aurora Borealis, more commonly known as the “Northern Lights.” But here we are, week one of the Alaska season and we have seen them twice! Well, some people saw it twice…

Day two of our weeklong adventure cruise between Ketchikan and Juneau the passengers were awoken in the wee morning hours by the on-duty mate to a call for Northern Lights.  Unfortunately I was either not awakened…or too tired from working too hard. Needless to say I was pretty bummed that I missed them, but very excited that most of the guest were able to witness it. Some guest grabbed some great pictures as well. I crossed my fingers that we would not only have another clear night, but that the light show would happen again.
Day three was it. It was pretty clear at sunet and slowly getting clearer as the night went on. I was too excited to go to sleep so I stayed up working on the millions of tasks that I try and keep on top of as expedition leader.  Finally around eleven I laid down in bed only to find myself too anxious to fall asleep.  Just before midnight the call came in….. Northern Lights! 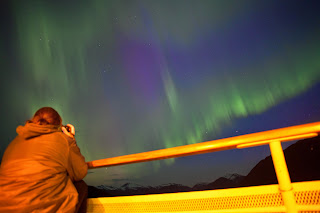 What luck. Great weather conditions, no moonlight, and a well times solar flare provided an incredible light show for us. It started off strong with hues of neon green covering the southern part of the sky near the horizon. I snagged a few pictures and then put my camera down to help all the other budding photographers fiddling with their cameras in the dark. The lights came and went and came and went so after two hours everyone was pretty dialed in and getting great shots. They were very appreciative for the nighttime impromptu photography lesson and I did manage to sneak in a few shots of my own when the lights would do some new spectacular array. At one point they were just pulsing and flowing across the sky. It was a long time coming and I imagine those couple of hours out in the middle of Southeast Alaska, helping those people get incredible photos is going to stick with me for a long time. 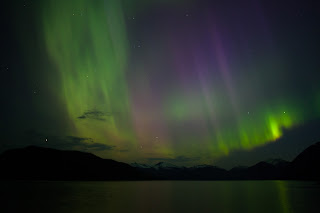