As we landed in Bali all three of us strained to look at the waves rolling in next to the air strip. Memories of my last trip here flooded my mind, all amazing, but eager to make new memories. Bali is only a three hour flight from northern Australia but it feels like it is a world apart. Locals still put out religious offerings every morning made of bamboo and flowers, traffic rules are ignored or perhaps do not exist, and rental a vehicle has just plummeted to $5 a day for a sweet motor scooter.

With a swell forecasted to arrive the very same day we did, we hustled through customs and caught a cab to our hotel in Padang Padang. Located on the southern peninsula of the island of Bali, Padang Padang has a beautiful beach, a tiny village, and a couple of world class waves. We were hoping to score some incredible surf in some incredible locations here in Bali.

We paddled for a sunset session and an early morning session the next day at Padang. Unfortunately we found that the swell direction was getting blocked by the huge cliffs this region is famous for. So for our third session we rented motor scooters with a side surfboard mount and headed to another famous wave called Uluwatu. This break is known for being ultra consistent, and today was a great example of this. Waves were barely chest high at Padang Padang but steady head high into the overhead size kept rolling into Uluwatu. The crowd is always a factor here but there are several different peaks to catch waves on.
We managed to catch some steep, big waves during our noonday session here and then some of my longest waves at our sunset session. Both sunsets have been incredible here. Along with all those long rides came long paddles so I think the next thing on the list will have to be one of those $10 Bali massages!

Deep into the Australian Rainforest: Daintree

We had a couple of days to relax after our intensive diving adventure on the Great Barrier Reef so we rented a car and drove into the rainforest north of Cairns to immerse ourselves in a totally different environment. While reef is home to a majority of Australia's marine life, the rainforest is home to a majority of the terrestrial animals. Scientist come from all over the country and the world to study the plants and animals here. It took a while for Australia to start protecting the area but slowly over the last few decades more and more rainforest land has been put under a protective management. This is so important because many of the plants and animals you find here are endemic, so this is the only place in the world they can be seen.

Thanks to a recommendation from a couple of friends we stayed at a place way out in the middle of the Daintree rainforest called Crocodylus Village. The rooms were pretty basic, with mosquito nets over the beds, but the view when you opened your front door was dense rainforest. There is a chance of seeing almost any animal right from your front porch. Apparently some guest have had to wait for showers because a curious Cassowary was camped in front of the communal shower door before.

Unfortunately our night wildlife hike was canceled due to persistent rain but we were able to fit in several day hikes into the jungle. The boys came across a prehistoric looking lizard called a Boyd's Tree Dragon. They cling vertically to trees and wait for passing bugs. Despite having cassowary crossing signs every couple of miles on the roads we did not spot one of the huge birds, but we did see some of the vibrant blue fruit that it eats. Passing through a cassowary's digestive tract is the only way for the seeds to become viable.

ing into the Coral Sea. Female crocs hold their territory in these rivers while males cruise in from the ocean to mingle with the gals.
One of my favorite parts of visiting this region was listening to some of the locals. The dialect and accent here are vastly different than the southern cities. Imagine a crocodile Dundee accent times ten. It was hard to understand everything but it was mostly about beer, crocs, and rugby. The owner of Crocodylus was extremely nice, giving us all kinds of suggestions of things to do. We all got a kick out of the fact that he looked just like the famous surfer Gerry Lopez.
Our second day was beautiful and sunny as we slowly made our way back down to Cairns. The road through the rainforest up to Cooktown would be a very fun experience, some of it 4wd, but we have surfing on the mind and a flight to Bali to catch.

Mossman's Gorge
At the southern end of Australia's Rainforest lies a glimpse of what lies in store for adventures willing to delve further. Mossman's Gorge is just inside the Daintree Rainforest which is a UNESCO World Heritage site in recognition of its universal natural values. It is possibly the oldest rainforest environment on earth. Leftover from prehistoric times before dinosaurs roamed. Ancient plants are found here and no where else on earth except in fossils. Some of the animals here seem just as ancient like the stealthy salt water crocs guarding their territories in the rivers. While other newcomers like Australia's heaviest flightless bird, the cassowary, have carved out a home in this unique environment.
Driving up to Mossman's Gorge you first arrive at a very nice visitor station where you can catch a shuttle 2 kilometers up the road. The views are pretty stunning, if its not pouring rain, as you travel up and out of the little sugar cane farming village of Mossman's into the lush green mountains behind. Mango trees line the road and as the sound of rushing water gets closer and closer.

The shuttle drops you off next to the stream and at the beginning of a nice boardwalk lifting you above the wet forest floor. Noisy birds abound up in the canopy, but dangerous snakes might cross your path so you can't concentrate too much looking up as you walk. In fact we crossed paths with a very dangerous snake called a red-bellied black snake. Listed under the highly venomous snakes on the posters. After a quick picture it slithered off into the underbrush, immediately disappearing even just a few feet away.

The longer hike option winds through giant trees and boulders, weaving its way between two mountain streams. If you don't mind getting off the beaten path then tranquil water holes can provide much needed cool down sessions during the hike. At this pool we were visited by a bright blue butterfly called the Ulysses butterfly, another animal people come from all over to see here. It reminded me of the blue morphos that would come out at dusk in Costa Rica. 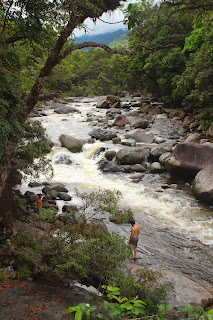 If the water is up you definitely have to be careful swimming, but the boys wanted to take it a step further and swim some rapids which you can see bottom right. All in a good day's hike in Mossman's Gorge.


Our three day scuba diving adventure is coming to an end too soon. It has been unreal how much of the underwater reef we have been able to explore in such a short time. Eleven dives in three days. Myles finished his certification as an open water diver, we had close encounters with sharks, we were the object of curiosity of a huge humphead wrasse named Wiley, we found Nemo and Crush, and made some friends along the way. It has been a whirlwind of diving and eating and I am sure will stick out as one of the most memorable adventures on our trip. It is also one with long lasting effects.
Once you become a certified scuba diver you are certified for life. It never expires, giving you the opportunity for the rest of your life to don a scuba tank and swim with the fish. I became certified back in my college pool in Georgia, and have been on over 300 dives since then. After I did my open water dives in Caye Caulker, Belize I dove sporadically for years whenever I would travel to a scuba diving location. I told the boys it can totally change the way you travel. You have this new option that was never there before.
One trip really comes to mind. While I was living in Japan I took a quick trip over to Egypt to see the pyramids and sail on the Nile. Little did I know that Egypt also housed one of the worlds greatest scuba diving locations, the Red Sea. So after finding this out from other travelers I jumped on a 16 hour overnight bus to the coast and had the highlight of that trip. Another benefit of diving is it can be a great activity for couples. When Heidi and I went to a dive resort on tiny Lembeh Island, Indonesia we saw 70 and 80yr old couples still diving together. So I was very excited for Myles and Jack for experiencing this and excited for myself to finally dive in the biggest reef in the world.

Barrier Reef Live Aboard Trip: On the Outer Edge

The big event of this day was Myles becoming a fully certified open water diver. This meant he was now able to come diving with us, unguided. We usually do our deepest dives in the morning, and gradually get shallower with the following dives. I was pretty excited to find a real nudibranch today, which I only noticed after I saw its bright orange eggs clinging to a rock. I looked around nearby until I spotted a beautiful, translucent orange nudibranch. We also saw bumphead parrotfish, maori wrasse, potato cod, morays, a sting ray, and lots of beautiful reef fish.
On the night dive we had a close encounter with a white tip reef shark, saw coral spawning, and had a fleeting encounter with a grey reef shark right as we got back to the boat. I switched it up today between shooting small subjects with my macro lens and wide reef scenes with my wide angle. Every dive here on the Great Barrier Reef seems to work just as well for either so it's always a tough choice which one to use.