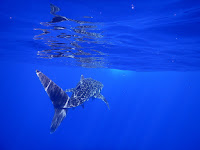 When the call came in that a whale shark had been spotted by some fishermen friends way offshore of Kona, Hawaii I didn't hesitate to make the call to head in that direction. If there was even a small chance of the shark still being there I wanted to see it. Since Jan. 2011 I have only seen 2 other whale sharks out here in Hawaiian waters, both being in Molokini Crater, Maui. As we raced out almost four miles offshore I crossed my fingers and hoped that this would be my third. 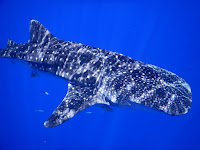 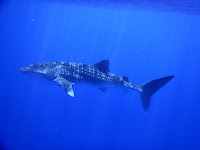 When we arrived at the FAD, or fish aggregating device, we saw multiple fishing boats milling about the area...a good sign. We all kept our eyes on the water for a dark shadow. I was the first to spot it. As we all watch the shark rise towards the surface its detailed spot pattern came into view. Researchers use these spots to identify individual whale sharks.

As everyone else watched the whale shark calmly swimming around the boat, I was busy getting into my snorkel gear. When the captain gave me the nod I silently slipped into the water and realized with delight that the whale shark was swimming right to me. I took a few pictures as it passed to my right then casually followed behind it, watching it check out several of the boats in the area. My guide jumped in from the other boat which I was glad to see. And that was it, just two snorkelers and a whale shark, with about 6,000ft of pure blue water beneath us. Why this shark chose to visit the surface on this day in this place I will never know but I'm sure glad I was there to greet it when it did. 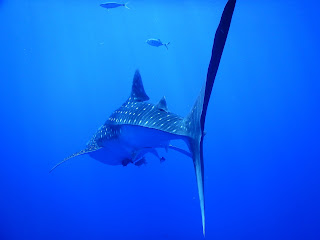 We had always heard about the muck diving possibilities in Amed, Bali. For the past three trips we had traveled just north of this community to stay and dive in Tulamben, where the big shipwreck is as well as good muck diving. It would be possible to drive between the two but since we had a few extra days at the end of our Indonesia time we decided to give Amed the go-ahead and really dive into what it has to offer.

We stayed at a place just outside of town called Puri Wirata, because it had a pool and its own dive shop. We flew into Bali in the middle of rush hour but managed to do some weaving in and out driving to get through it rather quickly. It was getting dark by the time we were making our way up the coastal road. I wouldn't want to drive in Bali in the daytime, so I found myself glad that Heidi had nodded off and wasn't watching our driver continue to bob and weave even in the dark. It was impressive. Scary, but impressive.

So we made it, got all moved in, and set up for diving the next day. Then we sat back in our ocean view room and watched as this thunder storm rolled out across the ocean. I guess we had gotten so lucky with the weather up till now that it was only proper that we see what the rainy season can really be like. Luckily we were here to see small creatures in the muck instead of big beautiful reef scenes so the reduced visibility wasn't the worst thing that could happen. We would learn a few days later that the rains washed out several bridges, rerouting traffic all around the island.

It was the muck diving we were here for, especially nudibranchs, and all I can say in woah! We found so many nudibranchs, plus a few frogfish, mantis shrimps, cuttlefish, and even a couple of tiger shrimps which was a first for this trip. The nudibranchs came in all colors, shapes, and sizes. It was very nice to photograph them against the dark background of the black sand. This is something about Amed that really draws in the macro photographers from around the world. It is like a little Lembeh, with almost as many creatures.

We did a few dives in Amed and a few in neighboring Seraya, which we thought was pretty funny since Seraya is actually closer to Tulamben and we dove there all the previous times. Amed is a bit more exposed to river runoff. So in our experience we would stick with staying at Liberty Dive Resort in Tulamben. It has a better setup with pools, dive shop, and location to the beach, plus you have the added bonus of diving on the wreck as well as muck diving in Seraya. It was also a little cheaper than Puri Wirata, although we did have a wonderful last few days here on our trip.

Today was the last day of our six day scuba liveaboard in the Komodo Islands. The crew of the Amalia and the boat itself took very good care of us. Usually on the last day of the liveaboard you just chug towards harbor to unload, but I was pleasantly surprised that we were going to have two more dive before lunch and then head back to Labuan Bajo to disembark. Cristina and Nelwan asked us what we would like to see and if we had a preference of dive sites and we all agreed...more mantas!

This turned into a really fun sandy muck dive with nudibranchs, mantis shrimps and a very rare rhinopias scorpionfish. These scorpionfish take camouflage to a whole new level, with wild filaments adorning their entire body. They are considered to be the 'holy grail' of fish for aquarium specialist as well as underwater photographers. Nelwan had gotten word that there was one in the area so we were quite pleased when we were able to find it.

The water here was impressively clear thanks to the currents ripping by on either side. All of the soft coral provided a great background for the nudibranchs and mantis shrimp pictures. It almost has a feeling of surrounding the animals in a magical forest like in the movie Avatar. 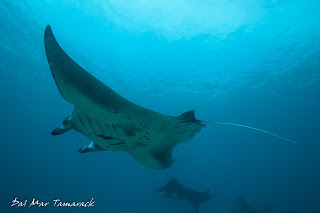 Our last dive of the boat trip turned out to be one of the most memorable dives of the entire year. I switched back to my big wide angle lens to hopefully capture the manta ray action of Makkassar. We saw mantas here a few days ago but without the current we missed a bit of the show.

This time when we dropped down we could immediately tell this dive would be different. The current was ripping. We saw multiple manta rays at the first cleaning station so we settled down on he ground, gripping the rocks below to avoid drifting off with the current. The manta rays on the other hand made stay in place look effortless. They hovered above the coral bommie letting the little cleaner fish shower them with affectionate nibbles.

Then it happened. I had hoped we would be lucky enough to have a good encounter with a black morpho manta ray. We dove with one four years ago at this same spot without really knowing the rarity of the all black manta. So you can imagine how excited I was when the black morpho slowly appeared out of the blue to hover just on my other side. I left the coral bommie, totally fixated on the black morpho. I managed to snag a couple of pics while it hovered with me. It almost felt like it was checking me out as well. Then, ever so easily, it swam back up current into the blue. 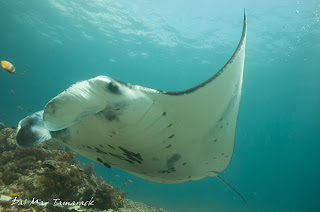 I can't believe that Day 5 of our 6 day liveaboard trip has already come. We have covered some distance and seen a lot already. Today the Amalia headed back North a bit to central Komodo for a bit of muck/macro diving with some beautiful underwater reefscapes thrown in.

We were still on a nudibranch kick from south Rinca so we kept the good nudi vibes going with some fun new finds. Our first dive was a site called Pil'arsteen. We checked out the beautiful 3 sisters dive site next where hunting blue fin trevallys scoured the reef. But it was our third site of the day that really blew us away. Under the waves lapping up against a small island was a muck divers dream. We found robust pipefish, ribbon eels, nudibranchs, relative of mandarinfish, and the ultimate find, thanks to Heidi's keen eyes, the cute, yet deadly blue-ringed octopus. This was a dive site called Wainilu, and would be another to add to your 'must dive' list while in Komodo.

The diversity of wildlife at Wainilu made us feel like we were back diving in the famous Lembeh Strait. I think Heidi and I could have dove here several more times just for the sheer amount of interesting critters. Nelwan even called this spot the 'Little Lembeh' dive. But unlike Lembeh, here in Komodo you have the opportunity to do a dive like this, and then head right around the corner to go dive with giant manta rays.

For an underwater photographer Komodo really is a great mix of wide angle and macro photography opportunities. I think we inspired some of our fellow divers on board to get interested in the small stuff, especially the nudibranchs. They were amazed at the range of colors and patterns displayed by these beautiful sea slugs. 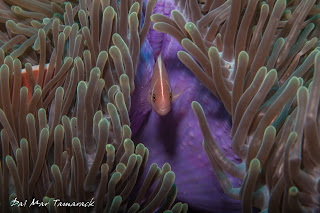