Shipwreck of the Sea Tiger: Scuba Dive with Hunter

During his Hawaii visit Hunter wanted to not just get some diving in, but go deeper than ever before. So we signed up for an advanced shipwreck dive off of Oahu's southern coast. We decided to tackled the wreck of the Sea Tiger.

Here is the online description of the dive:

"One of our favorite wreck dives on the south side!  The Sea Tiger is 168 ft of artificial reef, sunk in 1999.  An amazing array of marine life is already taking advantage of this ship, including squirrelfish and filefish, morays, endangered green sea turtles, spotted eagle rays and reef sharks.  The main deck sits at around 80 feet, while the hull hits the sand at about 127 ft.
The ship was originally named Yun Fong Seong No. 303, the ship was apprehended by the Honolulu Harbor Police carrying 93 illegal Chinese immigrants and became legend as Hawaii’s largest seizure of illegal immigrants.  The name Sea Tiger came from one of the ship’s later owners, a Vietnamese fisherman.  Voyager Submarines eventually bought the Sea Tiger and spent money and time getting her ready for her new home beneath the waves.  This wreck never disappoints!  Intermediate to Advanced depending on dive."

We really lucked out with the conditions, and the fact that there were only five divers on the boat! We also hustled out to the the dive site so we would be the first ones there. Again luck was on our side. We could see the wreck very soon after starting our descent. The water clarity was amazing, around 70-80ft. It is always so eerie seeing a once great ship lying down at the bottom of the ocean.
Huge schools of blue stripe groupers covered the wreck and a few turtles were calling the Sea Tiger home as well. We found some cute Kahuna nudibranchs and one very large yellow margin moray patrolling the deck. All told it was a huge success. Not only did we have a symnphony of singing humpback whales in the background but Hunter hit a new record depth of 120ft. Recreational diving limits you to 130ft. Always leave something for next time I told him. 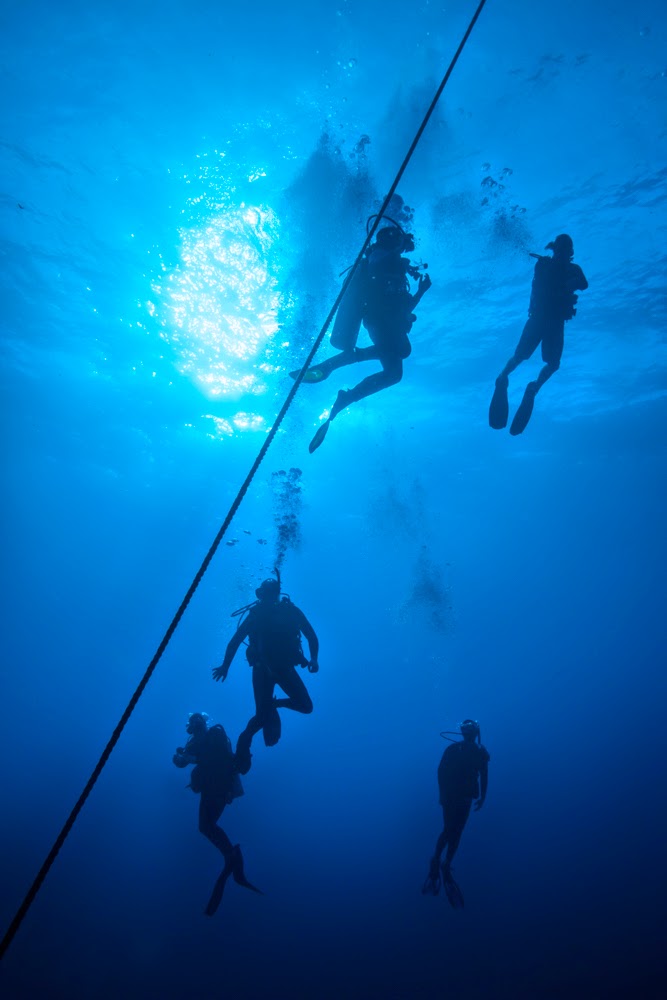 After driving along the coast, soaking in sun rays on the beach, and scuba diving under the waves, I wanted to show Hunter and Gloria a different side of Hawaii, so off into the jungle we went. A fun mile long hike through the dense rainforest behind Manoa Valley was our choice and it turned out to be a good one. We walked by sites where filming for Jurassic Park, Hunger Games, and Lost occurred, thru a dense jungle, only a couple of miles from the hustle and bustle of Waikiki.

It hadn't rained for a few days so the falls themselves were just a trickle, but I had never seen the pool at the bottom so clear. Getting her late in the afternoon also allowed us to have the falls pretty much all to ourselves. Chalk up another beautiful side of Oahu. 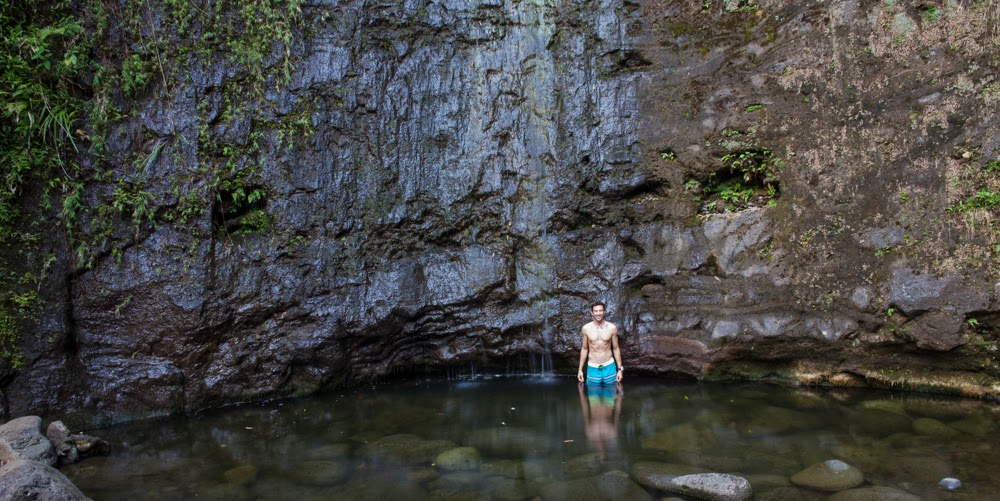 My good friend Hunter his new fiancee, Gloria, flew to Hawaii for a visit so we have been adventuring around the island non stop. A full island tour with stops for cliff jumping, (farmed) shrimp eating, wave watching, and taste testing was just the beginning. Day two we ventured out to the less visited West side of the island to do a little underwater exploring. Hunter got SCUBA certified during his first visit out to Hawaii so we always try to fit in a bunch of dives while he is here.

We picked a beautiful day to go diving at our favorite west side spot called Electric Beach. The only problem was when we pulled up I realized we should have brought surf boards instead of scuba tanks. It is a relatively shallow dive, about 20ft, and the waves looked way bigger than the forecast called for. But not to be deterred we strapped on our tanks and kicked out through the breaking waves near the beach.

Things were looking good as we kicked out through the somewhat murky shallow water. We saw a three legged turtle....it wasn't a fresh wound so I didn't worry too much. And while we could feel the waves overhead the water did clear up a bit out past the big outflow structure. Pretty much all of my pictures from this dive took place over the next ten minutes as we kicked around the beautiful, clear water. It was such a stark difference from twenty feet earlier where suspended sediment filled with water column.

It seemed the fish also enjoyed the clear water. Giant schools of pennant butterfly fish, goat fish, and others now filled the water column. We enjoyed our crystal clear underwater world for a bit longer before heading back in towards the murky reef. Perseverance paid off making this a successful dive. Welcome back Hunter

One of the coolest things we were able to do on this recent trip to the Big Island was to get permission to hike way up through private Parker Ranch lands to the very back top of Waipio Valley. We started off in the hills overlooking Waimea. Then on foot we followed a water irrigation road for a few miles. The dense forest up here was filled with the sounds of birds and the snow covered peaks of Mauna Kea and Mauna Load dominated the horizon.

We passed by one bigger stream on our way to the top but everywhere else looked like a high elevation bog. Then, all of a sudden, the view opened up into a breathtaking scene of Waipio Valley like I had never seen it before. There was a sheer drop to the bottom of the crater where waterfalls cascaded down and collected in one big stream meandering thru the valley floor. 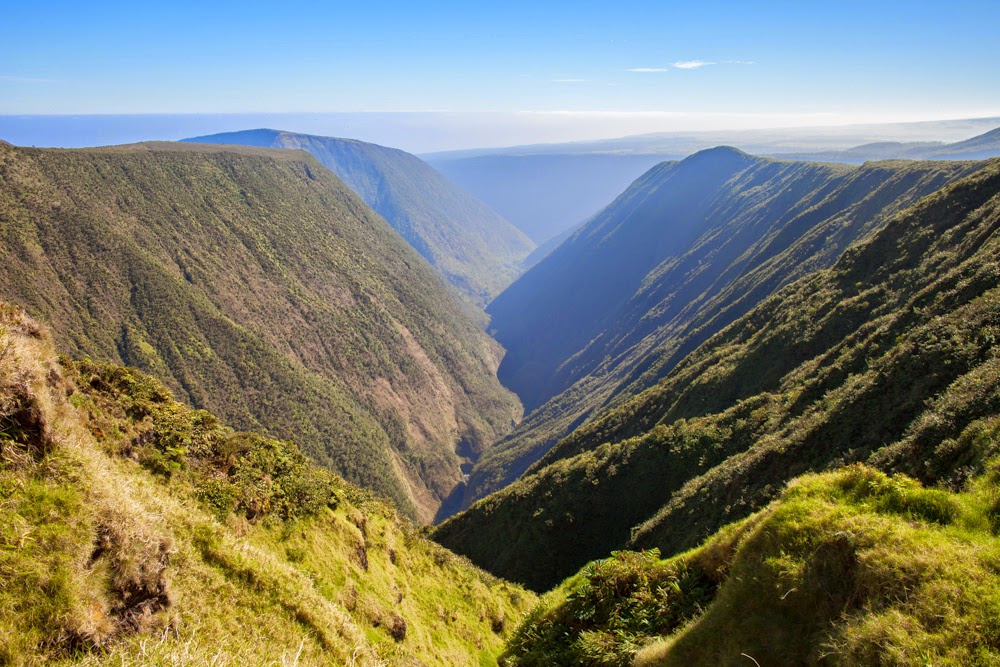 As we stood taking in the view a lone bird of prey flew not too high above us. It could only be one bird, the I'o, or Hawaiian Hawk. This is a very rare bird which can only be seen on the Big Island. As Heidi and I explored a bit farther up the rim we had a helicopter skim our heads as it came whirring out of the valley. I bet they were wondering how we were able to hike up here.

After a long driving day from Kona to the volcano on the Big Island of Hawaii the gang slipped into the hot tub at the Kilauea Lodge.We finished the day with a glowing dinner at the Volcano House. A visit from Heidi's parents all the way from Vermont sparked this getaway for Heidi and I to the Big Island. Us four, along with local legend Dave P., Becky, Leslie, and John set out to experience as much of the volcano national park as we could. It even turned out to be a surprise free National Park weekend because of presidents day! Must be a sign of good things to come.

The lodge we were staying at was first class all the way, from the hot tub to the private fireplace in each room. A symphony of bird noise erupted each morning out our window as the endemic honeycreepers called in the new day. Streaks of bright red darted from treetop to treetop through the o'hea tree's. There were so many apapanes that it gave me a new sense of hope for this rare species. The breakfasts here were fantastic as well as the one dinner we ate. Our first night we jetted off into the Volcanoes National Park to eat at the Volcano House, overlooking the glowing Halemaumau Crater.


We started our adventures by checking out the two museums and the art gallery in the national park, a quick hike through the devastation trail (with nene's!), and also a big hike down the Kilauea Iki trail. The trail descends through a lush rain forest to the floor of the solidified, however still steaming Kīlauea Iki Crater lava lake. Along the way we could peer into the 1959 vent that erupted to a height of 1900 feet located below the Pu‘u Pua‘i cinder cone. It was like a martian landscape. Small ferns and ohea trees have started to colonize the otherwise desolate volcanic crater. And birdsongs could be heard in the dense rainforest all around the crater. The clouds were rolling in and the wind kept temperatures from getting too hot. But we really lucked out with the weather. Everywhere else torrential downpours and gale force winds were ripping thru the islands. We saw the effects of the storm when we got back to Dave's house in Waimea and saw all the downed trees. February has been full of weird weather so far this year.

After dinner everyone was feeling worn out from the big hike so most turned in early. I grabbed my camera and tripod and drove the several miles back to the crater rim to try and capture the glowing crater at night. My dedication was rewarded with one of the best night sky displays I've seen in a long time, and the milky way leading right down into the smoking lava lake. It was a pretty mesmerizing site, and one that I will remember for a long, long time.

My good friend Phoebe was in town for a few days so I thought I would start her Oahu vacation off with a challenge, the infamous stairs of the Koko Crater hike. Over a thousand stairs heading up an old tramway translates to some calf burning, lung busting exercise that stays with you for a while. But the view from the top is totally worth it. Luckily this morning was cool but still clear and beautiful.

From the top of Koko Crater we could see across the Kaiwi Channel to Molokai, down to Hanauma Bay, and out to Diamond Head and Waikiki. Cactus hint at the dry climate although the rainforested tops of the Ko'olau range can be seen in the distance. We strained to look for whales in the calm morning waters of the Pacific but none could be seen.

Usually when you get to the summit on a hike like this the hard part is over. However, on the Koko Crater hike, the fun has just started. Muscles are taxed on the way down, making sure you don't fall through the cracks. One slip could mean a fifteen foot fall through the old tramway tracks to the ravine below. We persevered and made it just in time for me to get to work. EMAC (Early Morning Adventure Club) back in action!