My sister is in town for a visit so I am pulling out all the stops on an adventure filled exploration of Oahu to show her my new island home. She has already been to the big island and visited me on Maui twice so she knew to arrive ready for adventure. Our first day started out at the lookout on the rim of Punchbowl Crater. From the top of the military memorial cemetery here you can look down and have a great view of Honolulu from the airport to Diamond Head. From this serene spot we headed down into the hustle and bustle of Honolulu.

We drove through Waikiki, behind Diamond Head and past the mansions of the Kahala district before arriving at the famous Kahala Hotel. A few weeks earlier my mom discovered dolphins and sea turtles here swimming in the lagoon which the hotel surrounds. Lea and I happened to be there during one of their dolphin experience shows so we sat and watched the bottlenose dolphins show off just how intelligent they can be. The surroundings of the hotel are very picturesque and the stormy clouds coming in from the east helped make the scene even more dramatic although it did look like we may face some rain ahead.

Before turning the southeast corner of the island we took a few small side roads to an unmarked coastal access trail leading down to the infamous cliff jump spot known as spitting caves. The constant wind ripping through this area over the years has carved away pancake-like layers into the rocky cliffs. Massive mansions line the top of the cliffs overlooking the wild Pacific Ocean. 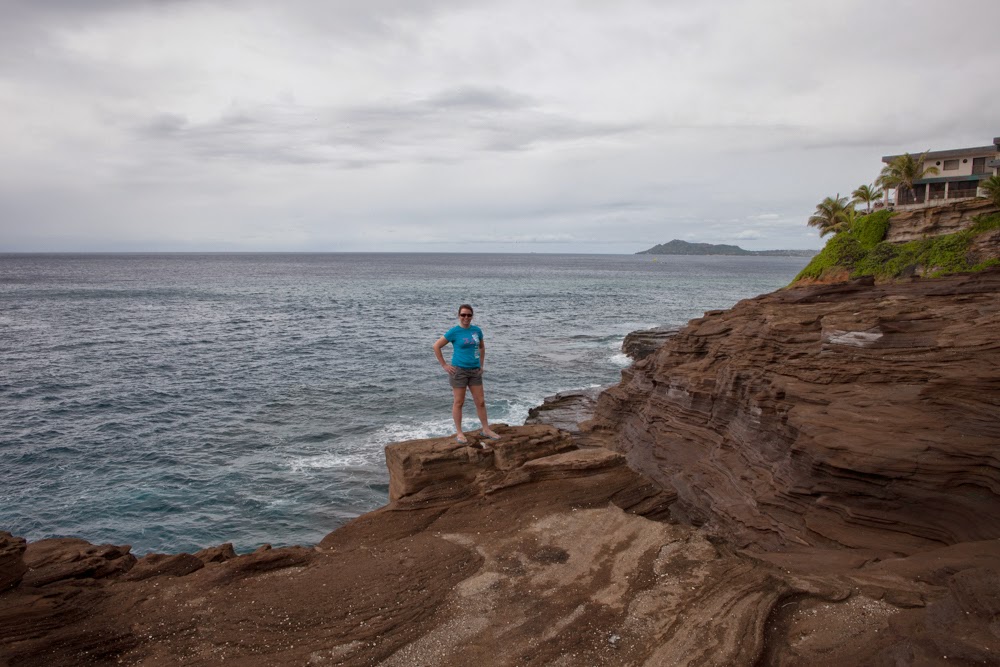 After turning the corner towards the east coast we could drive by Makapu'u without stopping at the incredible overlook high upon the cliff. The winds were unusually high here as you can see in the picture with Lea trying to fight to move forward. But once we were down onto the longest beach of Oahu, Waimanalo Beach, the winds were slack again and Lea enjoyed seeing her footprints stand alone on the deserted secret beach.

After a great lunch stop at Buzz's in Kailua, we attempted the Lanikai Pillbox hike but a sudden squall of rain sent us running in off the beach and back to the car before we could get started up the ridgeline. We decided to head back to the protected south shore and check out the Bishop Museum, which had been on my to-do list forever.
It was lucky we had a good chunk of the afternoon to explore the museum because there is a lot to see. From visually stunning planetarium shows, to reenacting melting lava, to displays of native and introduced animals kept us captivated until the museum staff quietly reminded us of it getting near closing time.
I guess I will have to head back another time to finish reading all the information that is on display here. We both knew we would sleep well after a big first day like this!