We made it to Fiji! The last stop on our Oceana tour is the island of Viti Levu, the main island in Fiji. We are looking for uncrowded waves, shark diving, and clear water. So far we are off to a good start.
Our adventure here in Fiji started off a little rocky. After flying a bit backwards from Christchurch to Sydney to Nadi we arrived, but our surf boards didn't! So after dealing with a bit of paperwork we were the last ones out of baggage claim, but luckily our driver from the resort was still there waiting. Since we were running pretty late our driver told us the resort is over two hours away and we wouldn't make it in time for dinner so we might want to stop somewhere in town. We said sure and he proceeded to drive down some back alley to a turn around lot with some trash on fire and a dark door with a scribbled "hotel/restaurant" sign on it. We thought it was a bit too dank to be real but we went in. I was almost surprised to see another door that actually said restaurant on it. It looked like a door to a toilet but it was locked so we never got to find out. We walked to the front of the building where the hotel ladies looked very surprised to see us, and they promptly told us in order to find food we needed to go outside. When we did we found ourselves back on the main road. So we chose a Fiji fastfood place, ordered some take-away fried rice, and waited with a pineapple fanta. After a while our taxi driver comes in and says, "where did you go?!". We told him we went to the restaurant and found nothing so we came here. Apparently we went to the wrong place but I still don't know where we were supposed to go. We got our a friend rice not realizing it was only the start to the adventure.
We ate our fried rice as the landscapes flew by. Well, flew by might be a bit of an overstatement at the pace we were going. Our rickety van made enough noises on a good road, on the main Fiji road it was quite loud, once we turned onto the resort road it was a symphony of noises. Add a sudden downpour and some very steep hills and you can start to imagine Fiji driving. A brave owl defiantly stood in the road as we jolted by still wondering how long this unpaved road to the resort could be.
Once we got to the Waidroka Bay Resort we felt like we were in good hands. The guy checking us in would also be our surf guide for our up and coming adventures. He said we could rent some boards until ours hopefully arrived. He then showed us to our three person room, or should I say three person and one huge spider room. It scurried across the floor towards Myles' bed before our guide disposed of it, somewhat embarrassingly. After a further look we realized the spider must have been there to eat all the geckos that had been pooping on our beds. Slept just as soundly though. 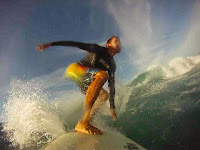 The next morning we were greeted with surfable waves at a place called Shifties. It was mostly rights which meant some rail grabbing good times. The most important thing was to stay off the bottom, which was razor sharp coral reef and very close to our feet.

I snapped some pictures with the long lens before heading off to join Myles and Jack who were already scoring some fun looking chest high waves. We all managed to have a lot of fun and except for a few very minor tangles with the reef remain unscathed. That is more than I can say for our guide who was fearlessly charging the shallow sections and got a bear claw gash across his left shoulder to show for it.

The island is divided into many villages, all of which have a sign post on the main road telling you that you have entered village land. Since we can only surf right around high tide here (its shallow enough without adding low tide to the situation- 6ft tidal change) we headed inland for an afternoon adventure. We caught wind that there was a cool waterfall nearby so we jumped in the same taxi that picked us up from the airport (we were old friends by this time).  He took us to the village community center where we paid $12.50 to the village. This got us a guide who took us on the winding path through the forest and across the river to a beautiful cascading waterfall. 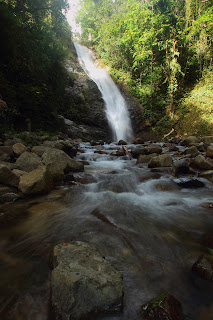 He also showed us the slippery climb up the waterfall to a fun jump back down into the pool. Definitely our kind of guide. I could have stayed here all afternoon but we started making way back. It turned out to be good timing as we could hear a thunderstorm rolling in behind on as we made our way back. Waterfalls and surfing....with a little scuba diving to come! Bula Fiji.