After just returning home to Oahu after a wonderful surf adventure abroad I was amped to see some big waves in my backyard. Luck so happens the swell has been lighting up the North Shore here in Hawaii so after a relaxing morning on the south side Heidi and I jumped in the car and headed North. 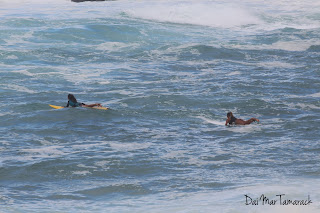 We could tell the waves were big well before we got to Haleiwa. But when we got to the shore there were no surfers anywhere. Haleiwa, Pauena Point, Lanis, Pipe....nobody. We had seen a few big wave charges as we drove past Waimea Bay so we stopped back by after Pipe. Surfers had their big guns out for some huge sets that rolled through, and it only seemed to be getting bigger. I was impressed as a couple of women paddled out as well. Always good to see. As I snapped a couple of pictures I noticed a couple of guys paddling much shorter boards over towards the shorebreak. It turns out this was Kalani Chapman and Jamie O'Brien.

From here on Jamie O'Brien stole the show. His buddies were set up back on the beach with a small motor hooked up to a tow cord. Jamie paddled out with the handle and had then take out the slack once he was out past the shorebreak.
I didn't think the communication would be in place to make this work in such a volatile environment but when the set came the engine roared to life and suddenly Jamie was on his feet getting pulled into the wave. Next thing I new he had thrown the handle and was surfing one of the most mutant barrels I've ever seen in person. Or on T.V. for that matter. After the barrel closed out ontop of him he casually ran back up the beach, told his buddies how crazy the wave was, then paddled out for an even bigger one. After doing this several times he caught a massive bomb.
The lifeguards here at Waimea are some of the best in the world. They see these conditions every winter and have new tourists playing on the beach every day. They would call out over the loudspeakers when big sets were incoming, urging everyone farther back away from the shoreline. One time they even called out a incoming bomb to Jamie over the loudspeaker. Pretty impressive if you command that kind of respect from the lifeguards here.