As soon as I heard the lava flow on the Big Island was flowing back into the ocean I wanted to see it. I saw this phenomenon ten years ago but ever since moving back out to Hawaii the lava has been pooling up underground and not flowing into the ocean. This all changed a few days ago when the lava busted out of several tunnels and started flowing over the edge of a forty foot cliff down to the black sand beach and crashing waves below. 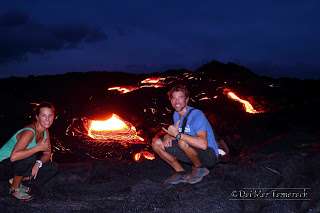 With the help of my friends Erica and Brent we worked our way out past the county guards with their walkie-talkies and out onto the flow. It is something that you just have to add to your list of must sees. An endless sea of pahoehoe lava rocks that have cooled into amazing formations. Some still look viscous while others bunched up into wire rope forms. As sunset got closer and as we got farther into the flow we started to see glowing red from up ahead. After an hour of rock hopping across the flow we slowly crept up to the active surface flow. We got close enough to feel not just the heat on our faces but up through our shoes as well. It was a little unnerving as I noticed red glowing lava through the cracks and fissures all around me. In the picture above Heidi and I are about ten feet in front of the lava. Luckily this lava flow moves very slowly. Although as I hiked out past the remnants of a burned homestead and a VW van that was just left for a couple of hours I figured I would keep one eye on the flow just in case.

The flow kept changing and forming new land. The real show was a couple hundred yards down slope where the lava had reached a precipice where it was flowing off the edge down into the surf below. 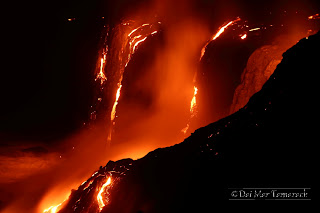 I couldn't believe we were getting such a good show! Little explosions, new fissures, and a constant flow of lava marching over the edge of the 40ft cliff. There was a little black sand beach at the base and whenever the waves came in they would sizzle up in poisonous smoke. I could have sat there all night. Every time I put away my camera some new fissure would open up and the flow would change again. 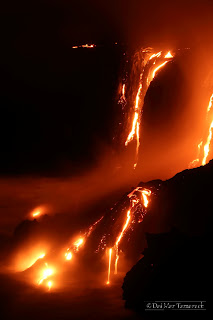 This lava is coming from a crack in the Earth's crust that the North Pacific plate has been slowly sliding over for millions of years. Geologists have traced the track of the plate by following all the islands this hot spot (which doesn't move) has created. The visible islands number 132 while the oldest islands have sunk back beneath the ocean becoming sea mounts. Scientist are debating when the next Hawaiian island will emerge with its own fiery lava birth.


Prints of the lava for sale here: DaiMarsPhotos
Posted by Dai Mar Tamarack at 8:00:00 PM