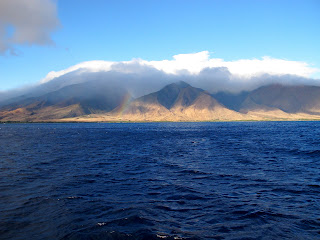 The whales have started showing up for this winters whale season and the wind seems to have kicked up a notch for their arrival. Hopefully soon we will get some nice, calm whale watching conditions but for now we can enjoy the incredible weather formations from cap clouds covering the west maui mountains to rainbows over the harbor. I don't think it can stay windy forever. 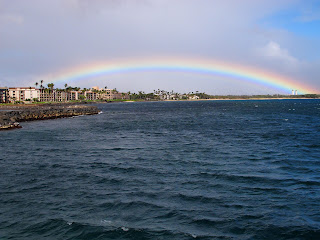 As the year comes to a close I am looking forward to lots of whale encounters, getting my underwater camera fixed, and surfing some legendary winter swells.
Posted by Dai Mar Tamarack at 5:01:00 PM No comments: 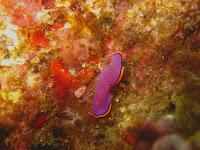 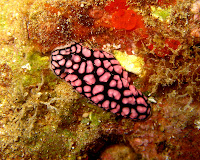 Reports had been coming in all week of a 10+ foot tiger shark hanging out in some of South Maui's most popular snorkel and dive spots. My friend Josh spotted it early in the morning while leading a snorkel which prompted Heidi and myself to rush down to the local dive shop, grab a couple of tanks, and hit the water for a dive I call, 'The Search for Tony.'
We went to a site called White Rocks and waded in. The water wasn't the greatest visibility, especially close to shore, but you could still see about 20ft. It cleared up even more as we headed off shore. It was quite fun searching the rocks and coral for our usual treasures of nudibranchs and eels but it is much harder when you are constantly scanning the water around and above you for something big. We covered a big area of the reef for about an hour and fifteen minutes. We found some very fun turtles all playing and rough housing with each other like brothers which made me think there probably wasn't a big tiger shark in the area. That coupled with the fact that we were both getting quite cold after so long underwater we gave each other the underwater sign for turning around and heading back.
So I still haven't seen a tiger shark in the wild but it was very excited just knowing that one was nearby. I have done many lectures on sharks, trying to dispel the myths and aura of fear that surround them. I feel like it wasn't a big risk to head out with scuba gear on this day. Scuba divers don't act like shark's prey so there is hardly ever accidental attacks as there have been with swimmers going up and down like pearl and abalone divers, or surfers that look like seals. Also we are doing nothing that would attract a shark out of the ordinary, like spear fishermen trailing their catch behind them. In fact the bubbles from breathing underwater on scuba seem to scare sharks off. Still with every adventure comes a certain amount of risk and I wouldn't suggest this kind of thing for everyone. I learned early in life working with alligators in the marshes of Georgia that no matter how much you study or handle wildlife you can't lose that healthy respect for the fact they are built as top predators. Plus sharks are always there, they often just swim away before we see them.

(A few days later...)
Tony the Tiger hasn't been spotted for a few days now which makes me think that he has swam back out into deeper water. But I will keep searching... 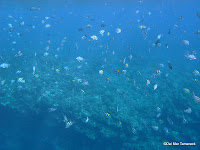 First Cathedrals has been on my dive list for a long time and I was about to get to see it! I was so excited. I was the first one ready in my group so even though I was a bit cold from the first dive I jumped in to see what lay below. The opening of Cathedrals could barely be seen 50ft down or so because of the clouds of fish. Sargent majors and black triggerfish schooled in huge numbers above the cave system but the real draw here is the topography. That was until I saw how much life was on this dive! 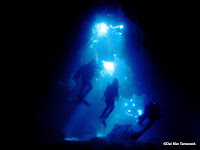 Entering into an underwater cavern with light filtering in from different directions is always an eerie experience. There is an unnatural shade of blue that gives everything a ghostly haze. But if you turn on a flashlight there is an amazing amount of vibrant bright colors. 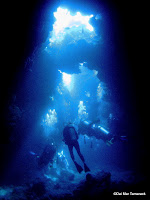 Inside the cave opens up into a massive open area which is where it gets the name Cathedrals. I would have loved to spend more time inside but there is so much to see. We exited out a small tunnel on the opposite side of the entrance named the shot gun, for how the current rushes in and out and if you time it right you can push yourself into the tunnel just as the current turns out and it will shoot you out like a bullet. 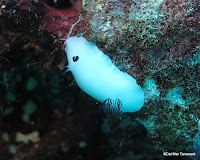 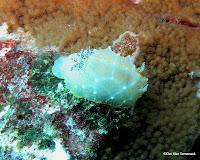 Outside the back of Cathedrals we entered nudibranch heaven. Gold laced, fellows, and several different phyllidias roamed the walls. We also encountered a huge titan scorpionfish hanging very close to a large lobster. Around a few more corners came some real treasures, two new fish for me, a Bandit Angelfish and a scary looking Viper Moray Eel. I can't wait to go back. 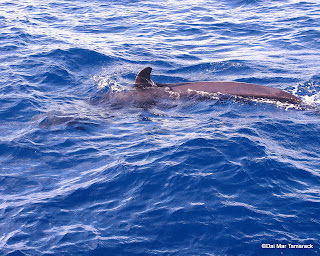 For an early birthday present Heidi surprised me with a dive trip to a location I have been wanting to go ever since moving to Maui. Off the coast of the island of Lana'i there are complex lava formations, one of which created a huge underwater cathedral type cave know as First Cathedrals. Somehow without me knowing she booked us a trip and got Ben, Diana, and Flora on board as well. We would depart out of Ma'alaea Harbor the next morning at 6:15am.
Its a long trip to Lanai from Ma'alaea so we kicked back, talked nudibranchs and what we wanted to see, ate some breakfast, and were surprised to see some large black bodied dolphins  heading our way. I snapped this picture of what may be a false killer whale or perhaps a short fin pilot whale. Either way it was a very cool sighting and a great start to the adventure. Since Cathedrals is a relatively shallow dive at 50-60ft we headed a little past it for our first dive at a place called Wash Rock.
We dropped down into beautiful water looking 70ft straight down to the bottom. And up ahead we could see a huge rocky pinnacle that shot up from the bottom and almost broke the surface. Unwary boat captains in the past have wrecked at this site before. Life lit up the sides of the wash rock itself and the coral reef extended all around it. A long tunnel swim through at this site called the 'tunnel of love' was a pretty neat added treat complete with a cowry graveyard within. 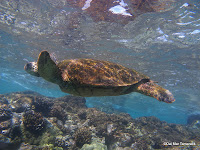 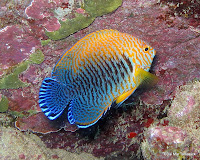 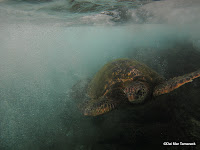 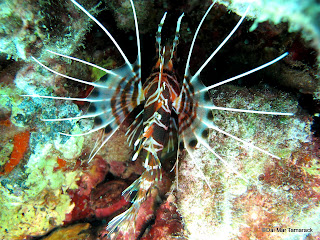 I try to spend as much time in the water as I can. So when the weather and conditions look good for a scuba dive (and they almost always look good here in Maui) I jump at the opportunity. This dive at white rock was filled with turtles and rare fish.
The bright blue and orange fish at the top is a Potter's Angelfish. Angelfish are hard to spot here in Hawaii because they dive deep into the reef when they see a diver nearby. The beautiful fish in the picture on the right is the second Hawaiian Red Lionfish that I have seen, both in the last few weeks. 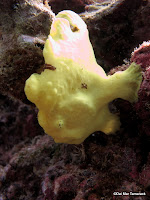 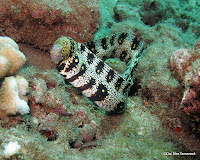 And to round out a great rare fish dive I came across this neon yellow fellow to the left, a Commerson's Frogfish. This frogfish still has its juvenile coloration. You would think bright yellow would not work as a camouflage but when you are surrounded by bright yellow sponges and corals you could swim right past him.
I thought this snowflake eel was too cute not to post. He was giving his best snake impression.
Posted by Dai Mar Tamarack at 6:41:00 AM No comments: