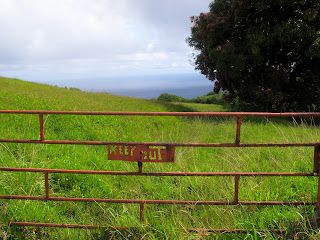 This incredible hike is a well known secret among hardcore hikers and adventurers here on Maui. Rumor of it spreads and that is all I had known until a few days ago when a couple of friends took me through the wilderness on the Commando Hike.

The hike is set on the northern lower slopes of Haleakala, on the road to Hana. You start off on the rolling hillsides, through a pasture populated with some rather large cows, into a small creek, through some intense vines, across a pool, up a waterfall and then you are about half way there. At the top of the waterfall the river bed shoots up and closes in and you notice the water is coming out of the mouth of a tall cave! An underwater light is necessary in the cave but some surprises still are in store. Once through the cave you have to shimmy out of a grate, then a short rock hop brings you to a beautiful swimming hole complete with private waterfall that is perfect for some cliff jumping. So in one hike you've got hiking, creeking, boulder hopping, vine swinging, spelunking, rock climbing, cliff diving, and swimming. 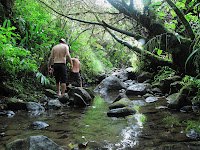 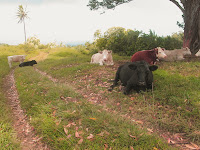 This post will cover the section of the hike from the beginning to the vines.
After jumping a fence just off the road, Josh, Marcel, and I hiked past these cows who were flopped out on the trail itself. Josh and Marcel acted very worried as they tried to scare me with stories of cows charging on previous hikes. We made it through unscathed, even past the two big bulls at the end. 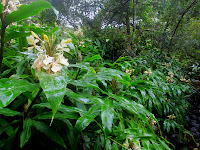 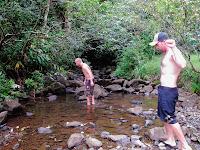 Shortly after we found a little creek which we started working our way up. Marcel and Josh led the way, leaping from rock to rock, trying pretty successfully to avoid slipping. Typical of this part of the island it started raining which made all the flowers lining the creek banks glisten with water droplets. We did have a serious worry if the rain kept up of flash floods, which this wet part of the island is also known for. 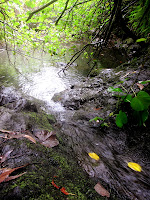 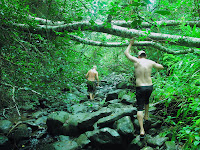 The rain kept up but no flash floods. The next obstacle came as we closed in on a dense covering of thick vines. These vines made travel very slow, and if the water level is high enough you would be forced to climb over and through the vines like a child's playground. Marcel was really in his element, pretending in the picture below to be a poisonous asp about to strike out and Josh. Boys will be boys. After penetrating the vines you get a respite in a beautiful little pool pictured here on the right. Fed by a little waterfall it is a sign of bigger things to come... 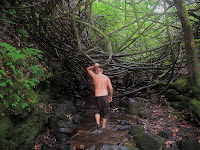 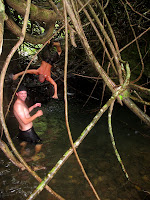 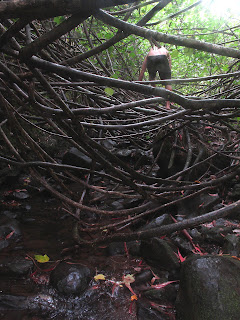 
Submit Images and Footage to Shutterstock and make money!
Posted by Dai Mar Tamarack at 3:25:00 PM