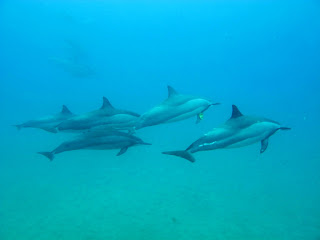 It is absolutely amazing being out on the water every day. It changes from week to week, day to day, and even hour to hour. The trade winds are usually blowing hard, funneling between the two volcanoes, but there are always some spots that provide great snorkeling. I love finding little sea creatures like nudibranchs and juvenile moray eels like the little whitemouth in the picture below. But every once in a while something big will swim through and steal the show.
I swam with dolphins a few times off the coast of california but I hadn't gotten the chance here in Maui yet. We have a few different species, spinner dolphins, bottlenose, spotted, false killer whales, etc., but we see them pretty infrequently on my trips. But I still hoped...
Yesterday we got lucky. Really lucky. As we pulled up to our second snorkel site we got word that there were spinner dolphins in the area. I ran to get the microphone and looked over the water to find them. I was surprised to see them very close to shore, swimming under some kayakers and another boat. We slowly drove into the area and got some close looks while I gave an in depth dolphin talk to all of our guest. One even soared out of the water spinning a full 6 or 7 rotations.
We then proceeded back to our snorkel spot and were excited to see the dolphins headed our way. I was going to kayak lifeguard so I grabbed my underwater canon and launched my kayak fast. I peered underwater which was unusually only 40 foot viz and couldn't see them. Then I caught a glimpse of some big silver heading my way but nope, it turned out to be a school of chubs coming to check me out. Then I turned back towards where I thought the dolphins should be and dove down. I immediately saw them, drifting ethereally through the water around 40 feet down, gliding over the sandy bottom. They are daytime resters, able to shut off half their brain at a time to rest but still function. Although if you look closely at the picture above you can see that one has a leaf on its right pectoral fin. They often play keep away and 'pass the leaf' when excited. It reminded me of a kid in kindergarten who reluctantly participated in nap time cradling his ball, dreaming about recess after. 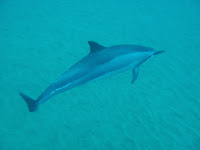 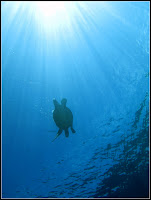 Posted by Dai Mar Tamarack at 6:21:00 AM No comments: Links to this post 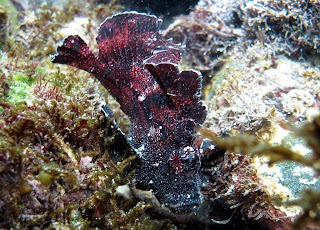 It has been unusually calm on the north shore of Maui lately. My surfboard has been sitting up in my house unused for weeks. So, if for nothing more than to spite the waves for not showing up, a couple friends and I headed into the heart of the big surfing spots for a little snorkeling. I've always wanted to see what exactly I have been surfing over and I was not disappointed.
Our spot was turtle bay, which is one bay past famous Ho'okipa and before Jaws. The entrance is a bit tricky with slippery rocks and little breaking waves but once in we were transported to a different world. Instead of coral and sand, it was boulders covered by all colors of algae. From bright red to iridescent blue-green. Moray eels slid between and under the rocks and fish like this scorpion fish above camouflaged in by staying perfectly still, waiting for a tasty morsel to swim by.
As we swam out deep the bottom turned into a honeycomb of deep channels, huge rock formations, and tunnels which connected thru the giant rocks. Tons of underwater arches and swim throughs appeared. We were treated with dozens of turtles feeding on the algae, lobsters, more sea cucumbers that I could count and tons of other herbivorous fish.

There is always something exciting about exploring a new place, especially when it takes a little work to get there and make it happen. And its exciting to think how many places here in Hawaii I still have yet to explore!
Posted by Dai Mar Tamarack at 7:20:00 AM No comments: Links to this post 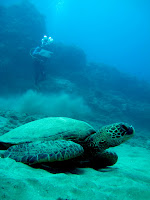 Part of my job here at Pacific Whale Foundation in Maui has been to take underwater photos of Hawaiian Green Sea Turtles at several locations while scuba diving. It is absolutely amazing. There are tons of turtles, some of which I am getting to know after seeing them on several different dives. And there are always lots of other fish and invertebrates to catch my eye as well.
On the dive today we saw 11 turtles, 3 species of moray eels, and a Vericose nudebranch. The eel in the picture is a small Undulated Moray Eel and the fish below is a Yellowtail Coris caught in between the juvenile red and white phase and the adult phase. I was diving with Heidi and Nick and I was able to snap their picture behind this one turtle who seemed fine with posing for a few pictures on the sandy bottom. Maybe he thought all the sand on his shell camouflaged him. 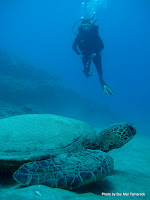 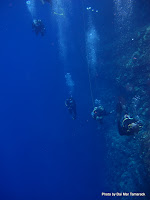 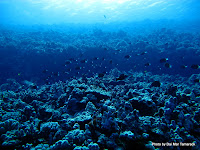 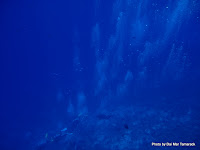 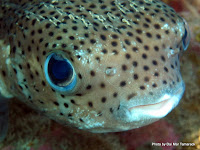 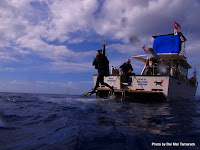 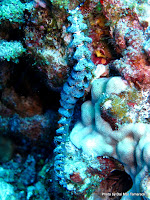 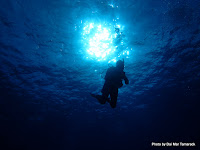 We get to go to Molokini Crater almost every day but we had not been around to the backside of the crate. It is a sheer dropoff, nearly 300 feet straight down to the ocean floor. Being 3 miles offshore the water is crystal clear although the currents can be very fast and dangerous. I participated in an underwater Easter egg hunt put on by a local dive shop and found a winning egg, so Heidi and I decided to cash in the prize (a 2 for 1 dive trip) and do a backside Molokini dive.
It was amazing. We got out early and immediately after jumping in we could see how beautiful it was underwater. The wall just dropped away into the deep blue and it was crawling with fish. So we descended to around 100ft and kicked along the wall. Its fun looking close up at the wall to see colorful nudebranchs (sea slugs), moray eels, and lobsters and then looking out into the deep blue just in case something big swam by.
After finishing up the backside dive we did another dive at Molokini called 'Reefs End'. When we swam around the outside of reefs end the current picked us up and carried us at about 3knots. We couldn't really stop for pictures but just imagine floating, 50ft down, and watching the reef fly by. It was the epitome of a 'drift' dive. The boat was there to pick us up at the end and we warmed up all the way back, anxious to look at our pictures and relive the dive! 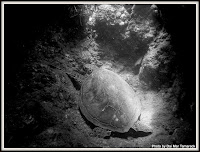 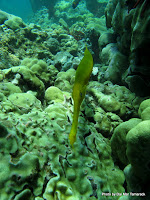 Posted by Dai Mar Tamarack at 9:38:00 PM No comments: Links to this post 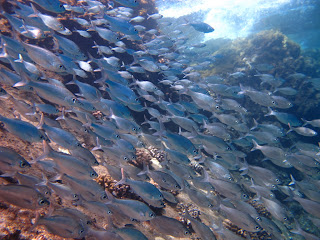 A large school of fish streaming through the clear waters at Honolua Bay. 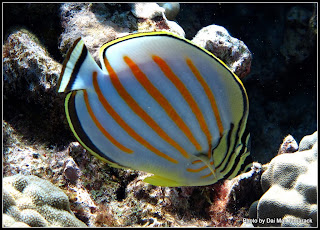 An Ornate Butterfly Fish, finally staying in one place long enough to get a picture. 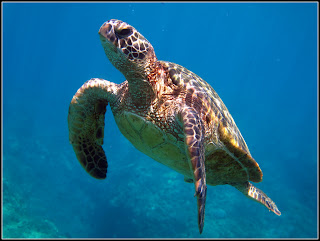 Even though Green Sea Turtles can reportedly hold their breath up to 5 hours, they are air breathing reptiles, so eventually they will come up to the surface, just like this little guy!
Posted by Dai Mar Tamarack at 5:51:00 PM No comments: Links to this post