Kruger Park with my Mom

Day 1: After a long drive from Golden Gate Nat’l Park in the Drakensburg Mntns we arrive at the southwestern located gate of Melalane and entered Kruger National Park in time for an afternoon game drive. We spotted impala and two warthogs with 9 babies all pushing to get their share of milk. Then we came upon a pack of wild dogs, one of the rarest predators in Africa. They were lazing about in the afternoon sun, occasionally looking up and twitching their big Mickey Mouse ears. We moved on when we heard there was a leopard hanging out in a tree a few kilometers away. He was far off the road but still quite beautiful to see. Four big white rhinos were next. They were investigating each other and one even gave another a pretty powerful hit with his horns. Then the birds started to come out; beautiful blue and purple colored rollers, big birds of prey like the marshal eagle, two African green pigeons, and a wattled plover, which I hadn’t seen before. A tiny dwarf mongoose ran up an old log to check us out and one grumpy elephant stopped traffic as we tried to make it to our camp before the 630pm deadline.

Day 2: We woke up naturally but still very early which is a great time for seeing animals. We quickly broke camp and headed north. Impala were everywhere; there are over 100,000 in the park. Zebra, wildebeest, and elephants also roamed the bush nearby the roads. Our next big find came when we slowed down to see what some stopped cars were taking pictures of and it was a Serval and her baby. These are very, very rare cats to see. They look like lithe, little leopards about twice as big as house cats. I spotted them a few times in the dense thicket but they soon headed deeper in the bush. Everyone left except for us. I was still hoping they would come back and give us a better look. We waited some more and then I glanced in front of us and they had gone about 100 yards up through the bush and come out onto the side of the road! We slowly drove forward and had a perfect view of them playing naturally, the young one running and jumping over its mom and then climbing a tree. All the while the mother didn’t give the baby a second glance, just let him expend his youthful energy. We drove on past more impala, zebra, giraffe, and elephants and caught our first glimpse of waterbuck, kudu, and black wildebeest.

After setting up camp and having some delicious pb&j sandwiches, mom and I went to the meeting point for our night safari drive. We loaded into this huge 20 person truck which was a little different than the one at Addo because instead of the guide holding the spotlight there were three seats in the back with lights for us to use to spot animals. I jumped at the opportunity to be a spotter. It was great fun. We found a small and a large spotted genet, a small cat-like nocturnal predator, another serval (that makes 3 in one day), a barn owl, lots of hares, a vine snake, and some possible hyenas.

Day 3: Another early wake up for me as I had signed up for the morning walk. It was about as extreme as a walk can get. We left at 430am, drove 20minutes out into the bush, got stuck on the way, finally parked under a tree, got out, and started following our two armed guides deeper into the bush. We saw fresh lion tracks almost immediately and started following them. (my kind of guides). Then we heard a leopard so we went towards it. Then I spotted the leopard walking a hundred yards in front of us. He strode across the edge of the field, in and out of bushes, until coming to a big tree. He checked it out, thought about climbing it, and then strode off in the other direction. Then he noticed us and took off into the deep bush. He was close enough for me to see his bulging muscles as he walked. I couldn’t believe we saw a leopard on a walk! Then the guides spotted some vultures in some far off trees. Thinking there might be a lion kill we headed towards the vultures. Turns out they must have been there for a leopard kill as we saw lots of zebra and wildebeest hanging out nearby acting very nonchalant meaning there probably wasn’t any lion in the area.

And the day was just starting. I picked up mom and we headed out for another self-drive safari. We saw two female lion across a large lake, and then came across another group of wild dogs! They were very close to the road in the shade of some trees. They were play fighting like dogs will without a care for all the cars lined up to see them. After twenty minutes they got up, one by one, and bounded off. The next big sighting came when we stopped to watch a herd of elephant coming up from a dip in the river. They were accompanied by the smallest elephant I have seen to date. He must have been born only a few days or weeks earlier.

I was pumped to make it to our next destination, Letaba camp, because we were signed up for another night game drive. I jumped on the spot light again. We followed the river and caught some glimpses of hippos foraging out of their waterholes. We were checking out a possible genet when our guide shouted, “leopard crossing the road!”. We all looked forward and saw not one, but two adult leopards crossing the road. We followed them with the spotlights as they turned and walked to our left. Pumped up from seeing leopards twice in one day I was totally satisfied. Then came the real treat. A big male lion lying down in the road, soaking up the heat. We watched it awhile before it got up and walked right past our truck and off into the bush. Then another big male came padding down the road towards us. As it walked past us it started to roar, which was answered by the first lion in the bushes behind us…and another unseen male lion in front of us! It was this deep, permeating, surround sound that leaves no question as to why lions are considered the king of all animals. 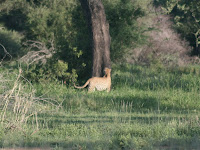 Day 4: After our incredible night drive we decide to have an easy morning. Mom and I break camp and do a quick run to the bird hide overlooking Engelwood Dam before heading back into camp for a nice, sit down breakfast. Then we head back south towards Satara Camp. On the way we pass the biggest herd of buffalo I have ever seen. It reminds me of the vast herds of Serengeti. We see some of the big birds, eagles, ground hornbills, and a kori bustard. Then at the camp we find a resident Scops Owl sleeping with one eye open in a tree and a sleeping bush baby in the next tree. I’ve always wanted to see a bushbaby during the day. They look like lemurs with huge eyes and are active only at night. We watched a movie that night at the campsite on their huge outdoor screen and as we were watching we noticed a bushbaby walking along the telephone lines. I followed him for about ten minutes before he found the tree he was looking for and shuffled onto it, sticking his head deep in a hole in the tree.

Day 5: We had another early wakeup this morning in order for us to drive about 600kilometers to Johannesburg in order to make it for a Johnny Clegg concert. We enjoyed the beautiful, lush, green grass of Kruger in the summer as we headed out. Wildflowers are everywhere and the smells of nearby animals are drowned out by the beautiful smell of flowering plants. We stopped to check out a couple of female lions apparently also enjoying the green lushness before heading out of the park and back into civilization.

We hit some pretty torrential rain on the drive back but arrived safely. Unfortunately we didn’t know where the concert location was but we got extremely lucky and saw a sign for it right as we hit the city. It was at this huge casino complex called the Emperors Palace. We had some fun with the slots before heading in to the theatre to grab out seat. The concert blew us both away. Heidi had introduced me to Johnny Clegg’s music which is really unlike anything else out there. Called the ‘white zulu’ he mixed music from his irish and celtic roots with traditional zulu as well as dancing to make a one-of-a-kind show. He is a natural storyteller and it was great hearing background of all the songs before he would play them. My mom had never heard of him before but I think she is hooked now. To cap it off we won 150 Rand as I taught my mom how to play roulette and then splurge at a nice dinner at one of my favorite South African restaurants Spur. Looking back it is pretty unbelievable that we were able to keep up such a fast paced vacation but that is definitely the way I like to do it. I guess it would be more what you would call an adventure than a vacation…