Swimming with a Black Footed Albatross 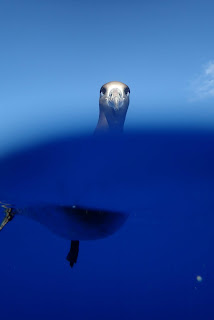 At first we thought we were seeing a tall dorsal fin sticking out above the surface of the ocean. There is any number of cetacean that it could belong to, from beaked whales to false killer whales to offshore dolphin species. The Big Island of Hawaii is one of premier destinations for cetacean experts to encounter and study these rarely seen creatures. However, as we got closer we realized it was something even rarer. It was a huge dark bird floating on the water. Our captain Colin shouted, 'Black Footed Albatross.'

All but 2.5% of the black footed albatross (Phoebastria nigripes) population resides in the Northwest Hawaiian Islands. Every once in a while we spot them flying offshore. They are immediately recognizable with their 7.2ft wingspan. I had spotted a couple over the last two weeks but I was very surprised to see one resting on the water. I was even more surprised at what happened next.

I slipped on my snorkel gear and grabbed my little olympus tough camera and entered the water. The albatross seemed to be just as interested in me as I was in it. At one point it tried to peck the camera in my hand. I was glad to have a snorkel mask on covering my eyes. This bird was huge! And so beautiful close up. I spent about five minutes in the water with the albatross looking right back at me. This is a moment that I imagine few people have ever had.

Molokai is known as the Friendly Isle, and for its large population of native Hawaiians. It is a place of no chain restaurants, high rises, or stop lights. Ancient fish ponds dot the coastline, tucked in behind the largest barrier reef in Hawaii. If one follows the state highway until it dead ends at the Northeast corner of the island you will find a hidden world of ancient Hawaii hiding away from the hustle of the rest of the state. This hidden gem is called Halawa Valley.

Halawa Valley is blessed with copious rain, a protected bay, an idyllic stream, and up to nine waterfalls cascading down the back of the valley. The valley was once a bustling farming community, but this all changed when a tsunami washed 1.7 miles up the valley on April 1st, 1946. It is moving hearing the story of that fateful day from someone who was there, watching and listening to the destruction from the hillside. Philip Solitario is the oldest living descendent born and raised in the valley who is still living in the valley. Tears well up in his eyes as he recounts that story, but it is only one of many stories that he holds and shares about this valley that his family has called home for 50 generations.

Today Philip, who everyone refers to as Uncle Polipo or simply "Pops", is the cultural practitioner of the valley. He and his son Greg teach visitors and Hawaiians alike the ways of their anscestors. Switching out modern day cell phones for traditional 'shell'-phones, Uncle Polipo and Greg blow the Pu, or conch to begin the ancient protocol of asking permission to enter the valley. The sound of the shell echoes off the steep walls of the valley and immediately takes you back to a time long past.

After the Oli chant and giving of gifts, we all participate in the traditional Hawaiian greeting called the 'Honi.' It means 'to kiss' in Hawaiian but it involves no lips. The honi is done by pressing your forehead and nose together and breathing in. Through this process it is believed that you share "Ha", the breath of life and are no longer strangers.

I've learned a great many things from Pops and Greg that transcend all cultures and religions. One of these lessons is known in Hawaiian as 'Nana ike Kumu.' This means 'Go to the Source.' In Halawa valley this means learning about your history and where you come from by learning from your elders...not books written by outsiders. Elders are their most prized possessions for the knowledge they hold. Luckily Greg believe firmly in this and made the decision to move back to the valley from Oahu to continue the legacy and learn all he can from his dad before he is gone.

The Solitario family believes the Hawaiian culture should be sacred, not secret, which is quite lucky for us who want to soak up and learn more about the real Hawaii. It has been amazing visiting this beautiful place over the last four years. I have grown close to Pops and Greg and hope I continue to see them thrive in the future. I really admire what they are doing and have been glad to expose so many people to this through these UnCruise Hawaii trips.

The mantas that frequent the Kona coastline have been not so frequent of late. In fact we've been getting skunked way more than normal this past year. So it was very refreshing to have multiple mantas back at the campfire for the famous Kona manta night snorkel last night.

At one point we had six mantas in our sight. The plankton was pretty dense in the cove and the mantas were definitely enjoying the plethora of food. We watched them glide over the scuba divers at the bottom, before swimming straight up under the snorkelers at the surface. These pictures of of the manta as it barrel rolled inches under our board. Our underwater lights lit up the white underbelly of the 8+ft coastal manta. The black spots and splotches on the belly are how we identify individual mantas. Over a hundred have been identified at this spot alone on the Big Island.

It is always a good time when you have to remind your snorkelers to lift up their feet so they don't accidentally kick a manta ray. Here is hoping that they are back for good.

Check out some of my past manta experiences here: Manta Ray Posts