The group this week has seen bow riding dolphins, an underwater ballet of manta rays, and swimming sea turtles…but the wildlife highlight of the week may have been the amazing humpback whales. February Hawaii is humpback whale central. Nearly 60% of the 23,000 North Pacific Humpback Whales are estimated to travel here to the Hawaiian islands during the winter. And while each individual whale may only stay a month or two, the most overlapping are here right now.

The guests saw whales from the hospitality suite on Molokai, and the sightings just never stopped from there. I told the guests to look for the 3 holy grails of whale watching here in Hawaii… a breaching whale, a brand new baby whale, and a competition pod.

Breaching means the whale is launching its 80,000lbs body out of the water.

And competition pods entail multiple male whales fighting over one female. We think this leads to her picking a mate although they have kept the act of mating a secret up to this point so we can’t say for sure. All I know is that watching these behemoths bash into each other and jockey for position is something to behold.

We got all the highlights this week including being able to hear the whales underwater with our hydrophone.

Here is to peak whale season in Maui!

Cliff Jumping off a Sea Cave 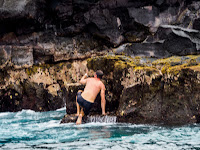 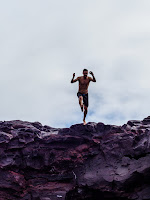 Once every couple of weeks we take the Safari Explorer far south on the west coast of the Big Island to explore some of the rugged lava rock coastline accessible only by boat. We take the guests out on skiffs and kayaks to get a closer look at the coastline which is pocked with caves, arches, and other interesting lava rock features.

This week brought much needed calm winds and small swells which opened up some new adventures. I had always eyed this one sea cave as a good potential for cliff jumping. The water was deep and clear in front of the cave opening and I had explored it inside and out by kayak in the past. I was leading the skiff tour this time so to spice things up I announced that I was going to give the folks a photo opportunity and dove off the front of the boat. 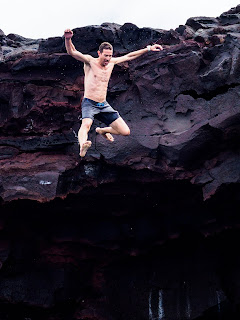 Getting up onto the rocks was trickier than I thought as the swells picked up just as I made it to the rocks. But after a few aborted attempts and a few scrapes I scrambled up the rocks and climbed my way to the top of the cave. It was a little higher than it had looked from the boat, but I was in it now so no turning back. I yelled to the skiff to give me a countdown. All in unison they chanted "3...2...1...jump!"  It'll go down as one of the more entertaining skiff tours for all of us.

In a previous post I talked about the 'Big 3' scuba dives in Maui. These three are Molokini Crater, Cathedrals, and Mokuhooniki Rock for hammerheads. I got the chance recently to revisit one of the Big 3, Molokini for some good old fashioned exploration of the deep time. The crater rises strait up from the submerged slope of Haleakala Volcano 300 ft down. This easy access to depth, along with some of the clearest water in Hawaii provides a rare opportunity here in Maui where shallow shore dives are more the norm.

My buddies Jack and Lucy from Maui Dive Shop joined me on their day off to do some fun diving of their own. Our first dive was on Reef's End. This is one point of the halfmoon shaped crater which gradually slopes down to the abyss. Schools of pyramid butterflyfish and garden eels greeted us about 60 ft down, then a school of grey reef sharks found us around 120 ft down. The sharks stayed a little too deep to get good pictures of but it was fun to see that they were still around. I remember seeing them back in 2001 when I did my first dive at Molokini Crater.

The second dive was on the backwall. This dive is possibly the best wall dive in Hawaii, dropping down sharply to 300+ft. We found black coral growing under the overhangs around 100ft down. One of the black coral trees had a rare long nose hawkfish (Oxycirrhites typus) living among its branches. The humpback whale song was amplified by the rock wall and provided our background music for the entire dive. As our air and time ran low I spotted a shape out in the blue. I got close enough to see that it was a massive manta ray but couldn't get too close as it stayed low and we were needing to hit our safety stop. We watched it out in the blue until is disappeared. It was such a wonderful end to a couple of beautiful dives.

Once back board we snacked and whale watched on the way back to Maalaea Harbor. January and February are amazing times to be out on the water here in Maui. The humpback whales are here in mass, playfully splashing about everywhere you look.