Here we are at the end of another incredible year. It has been filled with big travels, adventures, guiding, meet ups with family in foreign countries, and cool wildlife encounters above and below the water. Click through the different links for a look back at different posts and highlights from all the adventures. All the best pictures can be found at www.daimartamarack.com.

The year started out for me running exclusive guiding trips aboard the Safari Explorer in the Hawaiian Islands. The second half of January provided some ample off time for an incredible scuba diving trip to Indonesia with Heidi. We spent some quality time muck diving around the shipwreck of the UST Liberty in Tulamben on the island of Bali and out on Nusa Lembongan, a small island just off the coast. I was overjoyed to be joined by Ed and Jamie all the way from Savannah. Then Heidi and I flew a couple of islands east to catch a liveaboard dive boat called 'Amalia' for a weeklong underwater photo adventure in the Komodo Islands.

After another stint in Hawaii during the peak of whale season, including a whale shark, Heidi and I flew back east for a road trip from Savannah to Miami. We had the privilege of swimming with  and photographing manatees down in the Crystal River, and eating at Cafe Versailles in Miami with Nate and Kelly. Plus we finally got to dive the Blue Heron Bridge which has become famous for its muck diving and weird creatures. Add a little shark dive into the mix out of Jupiter, FL and of course some family and friends time back in good ol' Savannah.

April meant it was time to head back out for my second season with UnCruise in Alaska. I was expedition leader onboard the Wilderness Explorer for weeklong trips between Ketchikan, Juneau, and Sitka. So I pretty much had the entire Inside Passage as my playground. We went to towering glaciers, saw bears, humpback, and for the first time ever I saw hunting orca. I noticed these orca appear out of nowhere as we were watching humpbacks in Frederick Sound. We followed them for awhile but they had long dive times. Then I noticed a small pod of dalls porpoises swimming into the area. All at once the orca stealthily appeared in and around the pod of porpoises. They zeroed in on one porpoise and then proceeded to chase it, coral it, and let the young orca play train with it. It was amazing to see this kind of rare wildlife moment unfold in front of us.

My first off rotation included a two week exploration of central Alaska, including Anchorage, Denali, Seward, and Homer. I was shocked at the number of moose we saw, and the vastness of Alaska. We did get to see the mountain at Denali, although the typical rainy weather was pretty consistent. We stayed inside a greenhouse in Homer, came face to face with a moose, and walked on a glacier in Seward. The train to Denali was another great experience. I especially liked the very back of our train car which had a half door that you could stick your body out of to get a beautiful view and some fun pictures. 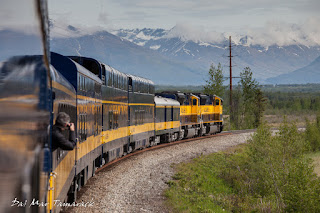 The next chance I had to travel came at the same time my mom was heading up to Nova Scotia on her happy retirement trip. I flew in from Alaska and joined her for some big tides in the Bay of Fundy, eating mussels in Prince Edward Island, and going out to see plays. We did get to meet up with my shark mentor, Janet Stalker, who showed us a little of her homeland of Nova Scotia as well. We had good luck whale watching for North Atlantic Humpback Whales but missed the Atlantic Puffins. Always leave something for next time. I flew over to Montreal to spend some time with Heidi and her family including a return visit to Tadoussac for some beluga and minke whale encounters and more great seafood. 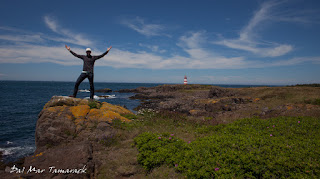 After finishing out the season in Alaska I met Heidi in the Seattle airport and we flew on Emirates Airlines all the way to Johannesburg, South Africa. We had six weeks to play with so we flew out to Reunion Island for some diving and hiking. The island turned out to be very similar to Hawaii, even having an active volcano. Then we put some kilometers behind us as we picked up a rental car in Cape Town and drove Cape to Cairo, including shark cage diving, cold water nudibranch scuba diving, surfing J-Bay, the Wild Coast, tropical diving in Sodwana, sulphur springs, and finishing off with a week camping in Kruger National Park. Fun sightings included mating lions, tons of rhinos, lion cubs, and the mythical sable antelope. I also got to meet up with my dad in Kruger Park to catch up around the camp fire late into the night. We realized that we had perhaps spent more time together in Africa over the last decade than anywhere else. 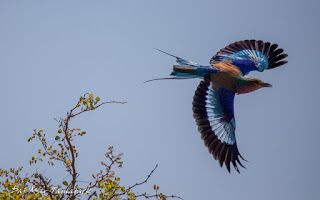 From Africa I flew over the North Pole to Seattle, then back to Savannah to switch out gear for the Hawaii season and to help my mom clean up the yard after the hurricane downed trees all over, and then on out to Hawaii to meet the Safari Explorer. I got see knock out the Big 3 adventures on the Big Island quickly before the season started and the slipped back into the expedition leader life. It is a great crew this season and a real pleasure being in Hawaii. But the travels weren't done yet.

My last big travel was a real blast and combined with a bit of work at the same time. I was sent on assignment down to Baja, Mexico by the UnCruise marketing department to gather photographs of their trip in the Sea of Cortez. As an added benefit I got a plus one so I took my mom. We enjoyed the perks of being a guests which were plentiful, including some amazing food, drinks, great activities like swimming with whales sharks and sea lions, and even a massage onboard. It was Heidi's last week working the trip so I got to see her in action and then spend some time diving, snorkeling, and surfing with her until I had to go back to Hawaii to wrap up the year working.

I stayed busy this year and I hope you have enjoyed following along on the adventures. I took tens of thousands of pictures and had a few stand out. It looks like 2017 is going to be another busy year. I can only hope it will be up to par with this year. I have a few exciting things in the mix for this upcoming year so stay tuned.

First Humpback Calf of the Season in Hawaii

It is nearly Christmas here in the Hawaiian Islands and we have been seeing quite a few humpback whales already. Around this time last year I remembered writing a blog post about seeing our first baby humpback calf of the season so I was on the lookout as we cruised through the Humpback Whale National Marine Sanctuary waters off Maui. One of the passengers shouted out, ‘thar she blows, 11 o clock!”, and sure enough a whale exhalation hung above the water like a little cloud for a few second before dissipating.  Everyone looked on in anticipation to see what the whale would do next.

Then it happened, another puff cloud but this time a second, smaller, exhalation was noticeable. I radioed up to the bridge to see if my other guide had noticed and she had. We both waited and watched until we saw the same thing again, and then we made the call over the ships loudspeakers, we had our first baby whale of the season!

These humpbacks are here in Hawaiian waters for two reason, having babies and making babies. It is always amazing to see a brand new addition to this species. The size difference is considerable between mother and calf, so to put it in perspective I remind the guests that this calf is about the size of a small pickup truck. We continue to watch as the calf playfully lays across mom’s head and let her carry him around for a bit before sliding off again. It goes to show just how massive mom really is. To get a really good size reference then check out my chance underwater encounter a few years back with a mom and a calf here.

Humpback whales are one of my favorite whale species to encounter. They are surface active and so acrobatic in their behaviors. The bond between the mother and new born baby calf is something we as humans can relate to. And witnessing one of the biggest animals the world has ever seen is always awe inspiring. I've compiled all my best humpback whale pictures here in large format high resolution.

On Assignment in the Sea of Cortez

The blog has been quiet for the last week because I have been traveling on assignment well outside of WiFi zones aboard UnCruise's Safari Endeavor in Baja, Mexico. I spent seven days aboard the luxury small ship with 37 other passengers documenting and photographing the amazing places, wildlife, and connections along the way.

With countless scenic coves, half moon bays, sandy beaches, and deserted islands the landscape screams for adventure travel. The life aboard the Safari Endeavor made adventure seem like luxury as the hikes and snorkels were spaced out with gourmet food, fine wine, and complementary massage. The fact that the crew to guest ratio was nearly 1:1 also made for a fabulous feeling of being well taken care of.

Luckily the weather cooperated, some key wildlife showed up, and the sunsets that I had been hearing so much about did not disappoint. More pictures and stories will emerge but lets just say it was a successful and productive immersion into the idyllic Sea of Cortez.