The Pull of Africa...

The Pull of Africa

After three '100 day' self driving safaris across 10 countries in Africa over the past 10 years I still havn't seen enough of this beautiful continent. I have taught baseball in Kenya, slept under a baobab tree in Tanzania, hiked with the gorillas in Uganda, and fell through a tree in Zambia. I've surfed at Jeffrey's Bay, scuba dove off Zanzibar Island, listened to lions roar outside my tent at night, and watched the sunrise from the summit of Kilimanjaro. Yet I still havn't seen enough of this continent.
So I'm back. This time I have nearly six weeks to spend which means big decisions to be made. I was lucky enough that my girlfriend Heidi also managed to get this time off which makes the decision a little easier because now it must include diving for nudibranchs!

To narrow things down we first decided to focus on Southern Africa instead of East Africa. For ease of driving and ease of budget South Africa has the edge on the wilder, more untamed East Africa. The roads connecting the national parks and game reserves of Kenya and Tanzania have received some improvements over this last decade but still leave a lot to be desired as far as potholes, lighting at night, and all around crazy divers. The roads in the parks themselves are more 4X4, washboard. You do however get the true "out of africa' wild experience still in Kenya and Tanzania. But for the daily expense of the parks it is hard to see where the money actually goes. If you can afford to fly between the parks however this may tip the scales. But we are sticking to a budget so we look South.

The ease of South Africa comes from multiple sources. With a normal economy rental car you can tackled the amazing road system that crisscrosses the country as well as the roads inside parks like Kruger National Park. You can also pick up a WILD card which gives you access to all the National Parks. An annual pass for 2 here in South Africa costs us about the same as 2 days entrance fee for a park in Tanzania. I was able to sign up online and have the WILD card sent to me before I even left the states, although if you are staying less than a month it is even easier to pick one up at the entrance gate to your first national park. Then once you are in the parks the road systems are a breeze and you can see just about any animal you can think of. At night you have to stay inside these small, fenced in camping villages...complete with a general store, restaurant, bungalows, campsites, and quite often a view over a river or flood plain. South African's love to camp and cook out so its a good idea to plan ahead when booking a trip as even the numerous campsites can fill up at these parks long before you arrive.

So after careful planning we have come up with something like this: Fly in and out of Johannesburg, S. Africa, a quick visit to Kruger before spending 10 days diving and surfing in Reunion Island, then back to Cape Town for a one way car rental to Joburg. Stops along the way will include diving in Cape Town, Great White Shark cage diving in Gansbaii, surfing supertubes at J-Bay, Addo Elephant Park, Mountain Zebra National Park, diving with shark south of Durban at the famous Aliwal Shoals, tropical diving in Sodwana near the Mozambique border, and then a full week back in Kruger National Park to finish.

Find pictures of my Africa travels here at www.daimarsphotos.com

Africa is a birders paradise. After spending one night in Kruger National Park near Joburg, South Africa I have already lost count as to how many different bird species we have seen. Here are some of the ones I was lucky enough to snap good pictures of, but there were many many more around. I think if you just stop for awhile and watch one big tree you will end up seeing dozens of bird species...maybe more. You will see every color of the rainbow in beautiful patterns. Then a bird like the lilac breasted roller takes flight and you see more colors than you thought could exist on a single bird. Birds of prey abound from hawks, to eagles, to owls, and even the pigeons can be brilliant green.

Flying Over the North Pole

A bonus of flying with Emirates Airline from Seattle to Dubai on a 14 hour leg to our final destination of South Africa is a rare chance to look out of the window down upon the frozen landscape surrounding the North Pole. On such a long flight the shortest distance is to fly up and over the globe instead of around. I was lucky enough to think about this just in time to check out of one of the windows to see the frozen coastline rapidly approaching. Snow capped mountains provided relief with massive glaciers in between. I could even spot giant ice bergs drifting through the water around the land. It was an otherworldly landscape that few will ever see. Even with all the people on our flight I don't think anyone saw except the pilots. Its a shame that there is no announcement for a sight so rare.

I tried to take a picture of the map on the seatback screen although the glare from outside made it quite difficult. If you look closely you can see our path leaving Seattle and taking us North into the snowy unknown. 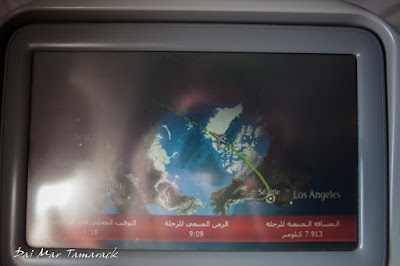 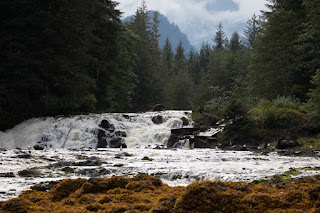 Relaxing on vacation after a solid summer season working as Expedition Leader with UnCruise gave me time to reflect a little bit on the amazing summer in Alaska's Inside Passage. I thought what better way to reflect back than to flip through my pictures and remember all the amazing sights and adventures that happened. 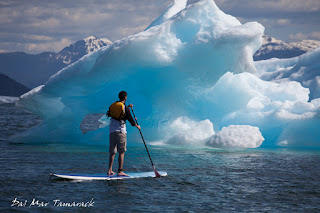 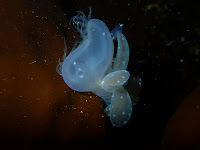 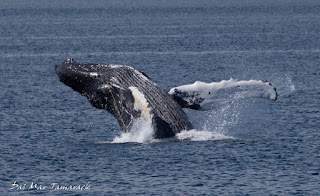