I have been to Glacier Bay National Park several times this summer aboard the Wilderness Explorer with Un-Cruise. But not until this past week did I arrive in the park to find it sunny and clear enough to see the tops of the snow covered mountains. When I did finally get a view of this I was blown away. The views went on forever. Massive ice fields feeding flowing glaciers, dipping all the way down into the calm waters make this like no other place I've seen. Add to the fact that we are on a very small cruise ship, only 74 passengers max, and we carry around a bunch of toys like kayaks, stand up paddle boards, and small skiffs to really explore the waterways in an intimate way.

These pictures are just a few of the views that I could capture in between a busy day of getting the guests on all kinds of adventures off the boat. There are some pretty amazing national parks out there across the country but this one is definitely unique. It also happened to be a few days after a storm had blown through dropping some fresh snow way up on the mountain tops...in August! 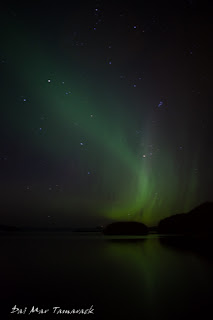 I would have never guessed that my welcome back to Alaska would include close bear enconters, several pods of orca, some lingering humpback whales, and a beautiful display of the Northern Lights!

I was awoken early in the morning, around one am, to the voice of one of our deckhands quietly waking me up for the northern lights. Then he said they would like me to make the announcement to everyone over the loudspeaker to wake everyone else up. So I conjured up my most melodic, middle of the night voice and told everyone to get their butts outside! The light show started off pretty beautiful but got better and better and the morning went on. Some of my best pictures came around 2:30am after almost everyone had gone back to bed. 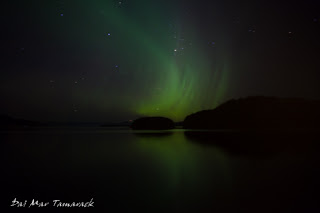 This was only my second time seeing the Northern Lights and it was just as incredible as the first time. We were so lucky to get a rare clear night at a time with the lights were visible. Lets hope that luck continues for my last three weeks of the Alaska season! 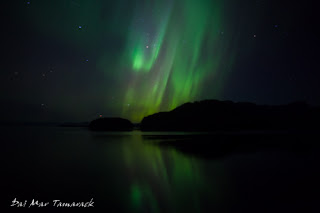 Fresh off an overnight in the Seattle airport I landed in Juneau, Alaska. Luckily the fog cleared before we ran too low on fuel, we had to circle for about a half hour before the visibility opened up enough for us to land. Typical Juneau. Once I was settled in my room at the Goldbelt Hotel I had a choice, head out for adventure or rest up for my next stint of four weeks without a day off. As you may have guessed, I picked adventure, and boy did it pay off!

I jumped on an old white schoolbus that takes people out to the nearby Mendenhall Glacier for $10. I expected a cool glacier view from across the lake, but what I didn't expect to run into was a family of black bears!
A mom and two cubs were frolicking in a salmon stream that luckily had a boardwalk over it. It was tough jockeying for position with all the other tourists and their iphones but i managed to put myself in a good spot for several passes.

The momma bear was actively trying to catch the bright red salmon that crowded the stream. Several times I saw her lunge off the bank, or run through the creek, in search of the next meal for her and her cubs. Twice while I watched she caught a salmon and dragged it up into the bushes. The cubs would eagerly follow and crunching noises would soon follow. The bear family stayed in the area for a good twenty minutes. 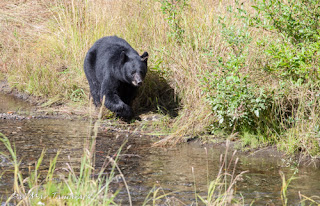 The shadows were tough so I tried to wait for the bears to enter patches of sunlight. This was my best and closest encounter with bears to date. Even though they bears passed right under the raised boardwalk I was standing on they never even looked our direction. 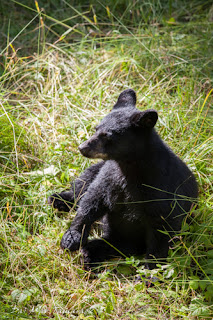 It is a weird feeling being in the presence of such a cuddly but deadly animal. Every time I see a bear, even very close up like this, I just want to run up and hug it. Just take a look at the picture on the right and tell me you wouldn't give that a big bear hug.
Talk about a nice welcome back to Alaska!

In Search of Beautiful Reefs in Lanai, Hawaii

I feel pretty lucky that I can come back to Maui for a quick two week vacation and have amazing adventures with great friends. One of these adventures was on my old boat, the Ocean Adventurer, for an all-day snorkel trip to the island of Lanai.

Lanai is often called the "pineapple isle" because it was once a massive pineapple plantation. Nowadays it is owned by the business software mogul Larry Ellison and is more of an elite tourists destination. Although at the moment the two major hotels that are on Lanai are closed for upgrades. Which means that the snorkeling around the island is almost completely untapped except for the few snorkel boats adventurous enough to make the drive from Maui.


We had wavy conditions but almost no wind. We found great snorkeling conditions at Lighthouse, Barge Harbor, Dinosaur Cove, and Shark Fin Rock. It was a good mix of shallow healthy coral and deep dropoffs. We did see a monk seal lounging on the beach and a spotted eagle ray flapping at the surface but nothing too big underwater. Kelly did find a beautiful yellow-margin spanish dancer which made both of us very happy! It does seem like back-side Lanai is the best place to find those little guys.

Ben did a great job driving us back and taking the boat high speed through the narrows. It is always so great to see healthy reefs, especially after spending a couple of years on Oahu where the dense population seems to have effected the reefs. Another wonderful adventure here in Hawaii.

High above the crowded beaches of South Maui lies a hidden secret adventure that only those in the know will ever experience. Hidden only a thousand yards or so off a well traveled road around 4,000ft in elevation sits a massive cave which angles slowly down the side of Haleakala volcano. The amazing formations inside and the cave itself were formed by lava, creating an underground tube to transport the lava farther down the slope of the volcano. The same thing can be seen actively happening on the Big Island currently. Luckily this lava tube is all dried up making it much safer to explore. However the loose rocks and obvious cave ins leave some cause for concern.

Part of this adventure is just finding the entrance. This included a dirt road, a jeep trail, jumping an old stone wall, then bushwhacking through dense brush for about tweny-five minutes before finding the lava tube entrance. It was surrounded by ferns, just like the famous Thurston Lava Tube in Volcanoes National Park over on the Big Island.

The tube doesn't look like much from the entrance, but after you duck around a rock you enter a long cavern that goes and goes and goes. Pat and I walked for about twenty minutes. He said he has gone for forty-five minutes without finding the end. Another friend of mine said the tube supposedly goes for about six miles before popping you out in the middle of the La Perouse lava flow way down along the Makena coast.
It is a pretty incredible experience imagining lava flowing through this cave system, snaking its way down the volcano only to ooze out miles away along the coast. It is a window into the geological past of this island. But the real mind-blowing thing is that no one really knows about this lava tube. There are no signs, nothing in guide books, and not even a trail that goes to it. Even though Pat had been there several times before it still took us a half hour of wondering, bushwhacking, and searching before stumbling on it. So at least in the near future, this will remain one of the great hidden adventures of Maui.

During this rotation off the boat I wanted to do a little high altitude hike training. Contrary to most tropical islands, Hawaii would be the perfect place to accomplish this with its massive volcanoes and beautiful hikes in and around them. I had done the 12 mile hike through the crater of Haleakala Volcano once before and was eager to try it again. I remembered the changing landscapes, different colors of soil, and the silence that comes with hiking through this otherworldly terrain.


I started out at the visitor center, just under 10,000ft down the sliding sands trail. This eventually lead 2,600ft down into the massive Haleakala Crater. I walked past giant cinder cones, lava tubes, and unique plants that can only be found here on top of the volcano. I even had a close encounter with one of Hawaii's most well known endemic birds, the NeNe. As I filled up my water jug at the wilderness cabin these two Nene came waddling around the corner and right up to me. They have obviously been fed in the past by hikers, which I wasn't going to do, but water is a different story. Both birds came right up to the water spicket and tilted there heads, opened their beaks, and greedily slurped up water. This went on for quite a while before they got their fill.

After reluctantly leaving the Nene birds I made my way up the switchback trail to the Halemaumau trailhead around 8,000ft. All in all it was about a 12 mile hike, in altitude, so I felt like a good days adventure.