Since the discovery of a thresher shark dive near Malapascua Island, adventurous divers have been flocking to the golden sand shores of this little tropical island north of Cebu, Philippines. Everyone wants to see big animals like the threshers. Those in the know come here for two reasons; thresher sharks and tiny macro critter hunting. The place to go for the latter is a nearby rock, jutting straight up out of the clear blue water, covered in dense jungle. Terns squawk as they fly in and out of caves and overhangs, but the real wildlife lives just underwater. Gato is famous for sea snakes but also houses treasures like sea horses, nudibranchs, frogfish, and even little white tip reef sharks.
Colors and patterns of all kinds shock the senses as you dive around the island. The shallows are best for nudibranchs and frogfish, while the sea horses like it a bit deeper.
Somewhere in between we came across cuttlefish and schools of squid as well as the local sea snakes. These snakes used to live here in the thousands but demand from the Orient for meat and supple skin for boots meant an open harvesting season on these salt water snakes. Tens of thousands were collected from this one island in a short period of time. I felt lucky to have seen a few trying to make a comeback. Now the island is protected. The Philippines are learning slowly but surely that ecotourism is the sustainable way to go.

I did two trips out to Gato Island during my stay because I liked it so much. Over the course of three dives I collected all of these photographs and more. As you can see it is an underwater photographer's paradise. 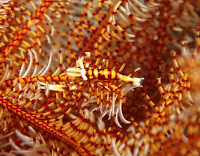 When I talked to my dive guide at Malapascua about finding rare small underwater creatures he told me about two nearby places; Calanggaman Island and Gato Island. Calanggaman, he said, is a long sand bar dotted with coconut palm trees that drops steeply off into the abyss. Gato on the other hand, was described as a solid rock topped with jungle surrounded by nudibranchs and sea snakes. I immediately added both destinations to our dive plans during my stay in Malapascua. First on the list was a two dive day trip to Calanggaman Island.
I was already impressed by J.N., our local dive guide and creature finder by his skill in spotting wildlife on our first few local dives. When we dropped over the underwater cliff edge on the outskirts of Calanggaman, J.N.'s critter vision went into overdrive. He found pygmy sea horses no bigger than your pinky finger nail. Ornate ghost pipefish, nudibranchs, camouflaging crabs, and scorpionfish were all spotted along the wall.

The wall itself reminded my of the backside of Molokini Crater in Hawaii. They both descend vertically into the blue abyss, despite the incredible clear water. The big different between the two is that when you look at the wall here at Calanggaman, it is covered in soft corals ranging from huge sea fans to colorful crinoids. Sponges of all different colors mix in with a few hard corals giving the scuba diver an overload of color in an otherwise blue green world. The animals have adapted to be brightly colored which works well in this tropical underwater paradise. 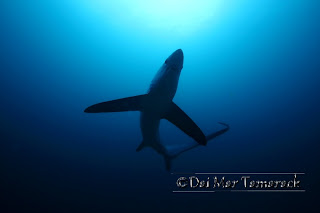 Thresher Sharks of Monad Shoal
When we started researching our dive trip to the Philippines we started hearing about a site near Malapascua Island where divers frequently encounter thresher sharks. Before this I had never heard of any scuba divers encountering this shark before. They usually live offshore and stay very deep in the water. The more I read about this place called Monad Shoal, the more I wanted to go see it for myself. I am a huge shark fan, and seeing one in the water is always a dream come true. This would be the 21st species of shark that I have swam with if I am lucky enough to see one. It turns out I did see a thresher shark here in Malapascua, but not just one, I saw 5 thresher sharks and had some incredible close encounters. Now the thresher shares a place on my list alongside an oceanic white tip, great whites, hammerheads, and whale sharks. Only about 360 more species of sharks to go if I want to swim with them all.

The thresher shark dive at Monad Shoal is an advanced, blue water dive. The shoal is a submerged island that comes to its highest point at about 40ft deep. When you swim over the edge of the dropoff you see a never ending wall. I'm not sure how deep it goes since we couldn't see the bottom but I did hear the number 200 meters being thrown around on the boat. Better not drop my camera here.
We swam down the dropoff to a small ledge about 100ft down. This is the perfect place to dive nitrox (an oxygen enriched air mixture) since your bottom time is pretty short. There is a line bolted into the bottom which divers are not allowed to pass. In front of you small fish dart around close to the edge. It turns out these fish are cleaner fish which draw the thresher sharks up from the depths to get picked clean of parasites and dead skin. The visibility ranged from poor to medium on my dives here but I was shocked to see the sharks come within feet of me and the other divers. My dive guide J.N. was always amazing at getting us in the perfect position for close encounters. At one point the thresher shark circled close to me, almost bumping my camera. 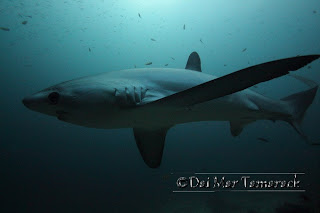 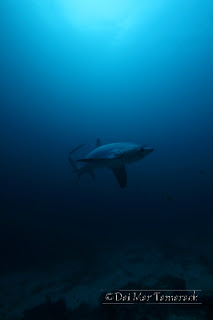 The sharks were so graceful in the water. Most were between 10 to 12ft long. About half this length was their long upper lobe on their tail. Big eyes help them see in the darker, deeper water where they thrive. Huge pectoral fins jut out from their sides giving an airplane like silhouette if you are lucky enough for one to pass over you and momentarily block out the early morning sun. 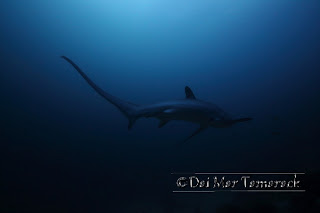 These sharks are non aggressive towards humans. Even more amazing is that they are not scared off by the noisy bubbles created by scuba divers. This is a one of a kind dive and a must do for any Philippines trip or shark enthusiast. I wonder which shark will be next on my list!

Check out a video of one of the close encounters here: https://www.youtube.com/watch?v=QM5wLeJOaWU
This video was filmed all on one dive by my divemaster holding my GoPro Hero 3 as I took pictures in front of him.
Posted by Dai Mar Tamarack at 1:33:00 PM No comments:

If beautiful sand beaches, happy hours, friendly, laid back locals, and excellent diving are what you are after, then look no further than Malapascua Island in the Philippines. After flying into Cebu Int. Airport it is a three hour car ride to the tiny port of Maya. From there a 30 minute boat ride takes you across the normally calm channel and deposits you right on the beach in front of all the resorts. Each resort has its own bar, restaurant, and dive center. Heidi and I chose Ocean Vida since we had a package deal with Sea Explorer Divers already and that was the resort that houses that dive company.

Malapascua has been a familiar name in the diving community because of its incredible macro wildlife. Sea horses, nudibranchs, sea snakes, and frogfish can be found here, especially on the nearby island dive spot called Gato Island. However, fairly recently Malapascua became world famous after discovering a submerged shoal where early in the morning thresher sharks appear to get cleaned by small wrasses. Thresher sharks are very rare to encounter in scuba diving depths since they are typically a deep ocean species. But here, at around 100ft deep, early in the morning you can see them on a regular basis.
There is a big wreck dive called the Dona Marilyn, however it is relatively new, only about 20 years old, and has not yet attracted the loads of fish that I have seen on other wreck dives. I would even go so far as to tell people to skip this dive for more dives at Monad Shoal for the threshers. There is another submerged shoal called Kimud Shoal where hammerheads are sometimes spotted as well.

It seems that the big draw to Malapascua for divers these days are the thresher sharks, which I loved. Heidi and I are pretty die hard nudibranch fans though so during the day when the sharks are back in the deep we told our local guide and divemaster, J.N., that we wanted some macro life. I could tell he was excited because most divers only want to see the big stuff, which there is not much of other than the thresher sharks. But show us macro critters he did...

Gato Island is only a short hop away. It is a beautiful rock covered in thick jungle and sea birds noisily flying on and off. It is also a local legend as the home of the sea snake. Thousands could be found here a century ago. Due to the soft yet sturdy nature of these marine reptiles, skin becoming all the rage in Europe plus their succulent meat being desired in China, hundreds of thousands of sea snakes were captured from this area. Now a sanctuary, the Gato Island sea snakes are making a comeback.

Gato and another island day trip called Callangaman Island are must do dive trips from Malapascua. Both places held incredible macro life that I hadn't seen since Indonesia. Pygmy sea horses (including a rare Denise's Pygmy Sea Horse), anglefish, tiny shrimps and crabs, nudibranchs, and frogfish are there for the devoted searcher.
And if all of this wasn't enough, Mandarinfish can also be found here at Malapascua. We went out our first night to find them at a site called Lighthouse. It was just Heidi, me, and J.N. which was very lucky because the mandarinfish can be difficult to see and the encounters are so brief.

After a few days of diving, happy hours, hanging out on the beach, and thresher sharks, Heidi and I decided that this was our kind of island. It reminds me a little of Caye Caulker, Belize because you could spend the entire stay in bare feet if you want. The sand is soft and white and the water is that tropical turquoise color you see in postcards. Overall Malapascua will be hard to beat on our Philippines tour, but we'll try.