A short walk away from where I live is a wonderful place for a photographer. It is where the ocean meets the shoreline. Here on Maui you can find tall cliffs made out of old lava flows, sandy beaches in black, white, and red, and of course the idyllic palm trees. Around sunset this coastal setting is perfect for practicing long exposures. This is when you keep the shutter on the camera open for longer than normal to catch things that the eye can't see. The ebb and flow of water has a misty character that looks almost ethereal when caught over time.

Every once in a while someone will ask about my past to figure out where this drive for adventure, wildlife, and water came from. I thought a great way to show them is with photo snippets of my early life. I grew up in Savannah, GA around salt marshes, barrier islands, and tons of wildlife. One of my first jobs was helping my dad catch and release alligators. Just like how I educate people about sharks now in hopes that they will conserve and champion them we would take people out catching alligators so they could learn more about them. It is this hope for inspiring others that drives me so much in my professional life today.
The salt marshes weren't just a playground for alligators but tons of wildlife from bald eagles, ospreys, bottlenose dolphins, and of course...me! Even now whenever I head back to Savannah I go out kayaking with my mom. It is such a peaceful way to interact with the water. As you can see I was on this path for a long time.

Winter time has come here in Maui which means humpback whales arriving on the south shores and big surf on the north shore. This morning Ben and I paddled out early to a calm, beautiful day of overhead surf at Ho'okipa Beach Park. The waves were consistent, the crowd was friendly, and everyone was enjoying a rare non-windy day except some cranky windsurfers. After getting scraped around on the reef after falling off a big lumpy takeoff I decided to lick my wounds and grab my camera to try and get a bit of the feel of the day. Lots of bystanders watched the surfers from high atop the overlook. Many locals just enjoyed the beautiful beach conditions. And one father even found a calm corner to teach his daughter how to surf. As you may have guess there was a lot of aloha in the air. 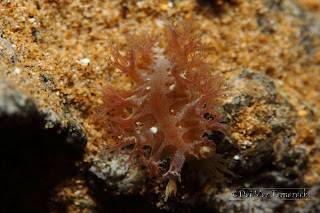 I can't believe I spotted this guy. If he hadn't of been all by himself he would blend in perfectly with the surrounding algae. This is a Marionia hawaiiensis, a seldom seen nudibranch found in very shallow Hawaiian waters. I found this guy in about 3 inches of water, in a tidepool at night.
We only have a two foot tidal change here in Hawaii but all of the lava rocks form perfect tide pools if you catch it right. What a lot of people don't realize is the volume of incredible creatures you can see in the pools, especially if you go out at night with a flashlight. 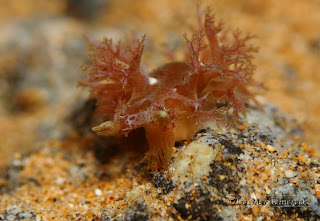 Last night we had a -0.27 tide due to the nearly new moon. The trickiest part of getting these pictures was trying to get my huge underwater DSLR housing in the water but far enough away to be in focus. Those lava rocks are pretty sharp when you lay down on them. I just hoped the dedication and bruises would pay off.
Posted by Dai Mar Tamarack at 6:25:00 PM No comments:

Under the Pier: Mala Wharf, Maui

The old wreckage of the Mala Pier is the home to many of Maui's famous larger marine life. I often come here to look for white tip reef sharks, green sea turtles, and spotted eagle rays. On this one dive I found all of the big three, plus eels, nudibranchs, and more fish than I could fit in even with a wide angle lens. It is almost like diving a shipwreck with straight lines seldom seen in nature. The wreckage fell in on top of itself in a way that created a lot of hiding spots for creatures that prefer to stay out of sight of hunters. 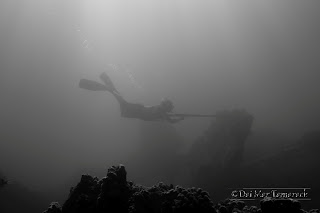 A new hunter was on the reef this day, a human spear fisherman. It is funny how much more nervous some random guy with a spear makes me than a shark while I am underwater. There is already an eerie, almost mysterious feeling with any wreck site, especially under the part of the pier still standing. The light and shadows cast an otherworldly sight.

Some of the animals here acted a bit out of the norm. The spotted eagle ray circled me for about 20 minutes and this white mouth moray eel opened its mouth so wide I thought it might be yawning. 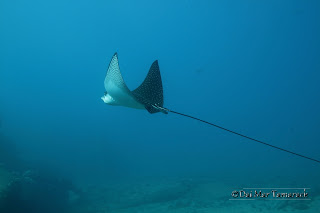 The underwater world never ceases to amaze me. 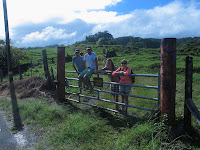 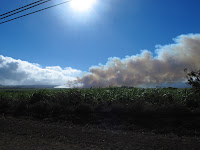 Last time I wrote about the infamous Commando Hike it quickly became the most searched for entry on my entire blog. Apparently the secret whereabouts of this hike are secret even from the Maui Revealed guide book. As my favorite hike on the island I decided I had to share this with my friends Ryan, Will, Mickey, and Abby who had a week in Maui before catching their tall ship in Honolulu to set sail to Tahiti. Here is their adventure in pictures. 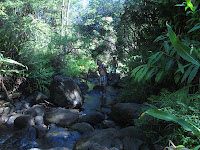 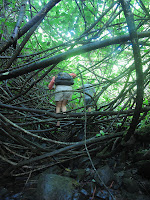 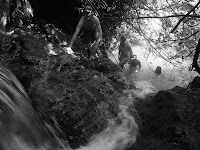 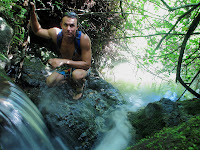 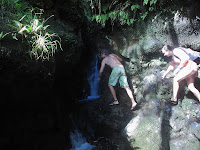 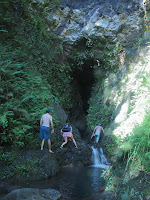 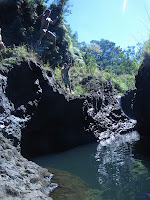 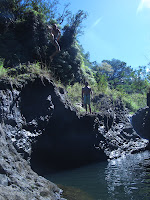 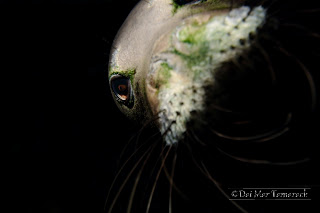 There have been very few times when I have been out in nature where an animal is big enough not to be scared of me and curious enough to stick around to check me out. This time it happened to me with a very rare endemic Hawaiian Monk Seal. Population estimates put the total number of Hawaiian Monk Seals below 2,000 individuals...in the world. However when compared to the other 2 species of known monk seals this paltry number sounds a little more hopeful. There are about 600 Mediterranean Monk Seals and 0 Caribbean Monk Seals. The last sighting of a Caribbean Monk Seal was in 1952 and was officially declared extinct in 2008 after a 5 year exhaustive search came up empty.

Conservation efforts have been put into effect for both of the remaining species of Monk Seals. Out here in Hawaii NOAA heads up the effort with a Monk Seal specialist on each island as well as a network of volunteers. Sharks are the biggest natural predator of these seals although some fishermen target them as pest and monk seals with bullet holes in them have washed up on Hawaiian beaches in recent years. What may be even more dire is the small population not having the genetic diversity to withstand certain disease outbreaks or climate changes. This is especially a concern in the Mediterranean monk seals whose spares population is spread out over a vast distance, thus reducing the chance of genetic exchange further. 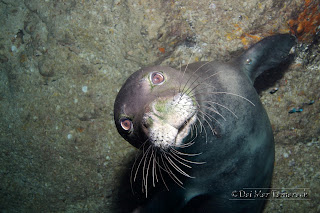