Weird Fish of the Lembeh Strait

What a wonderful world underwater can be. Making our way out to Sulawesi Island after 2 plane stops, driving another hour to the port village, and then a 10 minute boat ride to Lembeh Island makes me wonder in amazement at travelers that would come to these places 50 or 60 years ago. The world is truly at our fingertips now. I can only imagine what travelers in 50 or 60 years from now will think about us. Maybe they will be shocked that we would spend days traveling to these places when all they have to do is teleport.
Sometimes the destination makes the journey worth it and many times the journey itself is worth it all on its own. Lembeh is a bit of both. The drive across Sulawesi is through little villages and past giant volcanoes covered in forest.
But underwater is how Lembeh really shines. The variety of fish in these waters is mind blowing. You can see a lot of reef fish you might see in aquariums but it was the outlandish, and often times rare species of fish we were after.

Just by taking a look at these pictures you can get an idea of the variety of body shapes, sizes, forms, and colors of fish species in these warm tropical waters. Like I've said before, the underwater world never fails to inspire wonder. 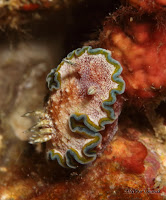 Indonesia is a hot spot for biodiversity, especially underwater. Hundreds of nudibranchs, colorful sea slugs, can be found in the near shore waters here. And no place can boast quite the variety as Lembeh. In the Lembeh Strait nudibranchs are a common occurrence on almost every dive. However it took some time for me to realize that while I was seeing nudibranchs on every dive I was almost always seeing different species. For an underwater photographer these snails without shells are perfect models. Bright colors, beautiful patterns, frilly gills, and slow movements make nudibranch enthusiasts travel the world just to see them. Hopefully after taking a look at some of these nudibranchs you will see my inspiration to continue the search. Luckily I can continue the search back home in Hawaii and as long as you live near a coastline you can search as well. Nudibranchs are found in every ocean from cold to tropical waters.

If you have heard about muck diving then at some point you have probably heard about the Lembeh Strait. Lembeh is a little island off the east coast of Northern Sulawesi in Indonesia. In between the two pieces of land

is a fairly protected body of water that has become known as the best place in the world for muck diving. Nudibranchs, sea horses, octopus, cuttlefish, and of course frogfish are just some of the wild and crazy sea life you can see here.
I was not prepared for how many different kinds of frogfish I would see. These are just a few of the frogfish that I saw during my 10 dives here in Lembeh. Check out all the different colors, patterns, and sizes. 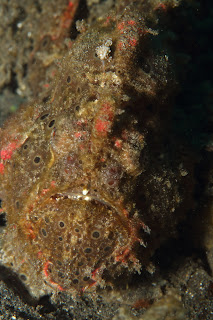 Driving thru the island of Bali I was amazed at the number of temples and the fact that the surrounding buildings seem to share walls and architecturally flow seamlessly into and around the temples. It can make it quite hard to know where the actual temple ends and the homes begin. Most town have one large temple and many smaller ones with even more statues all over. Stone carving is a famous profession here in Bali so there is no shortage of stone Buddhas or other deities to carry off.

Getting more in depth in the culture means checking out some of the local dances. The costumes, make up, and especially the masks are just incredible. During this Kecak dance a beautiful woman is kidnapped by a demon in disguise. His comedic demon friends keep the crowd entertained while the monkey god spirits in to rescue the woman. Apparently he does this by stomping out the ring of fire with his bare feet. Pretty cool show although I am shocked no one was burned. 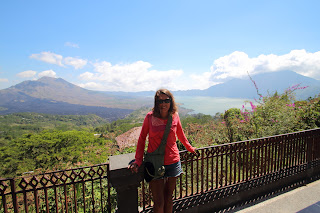 The most famous temple we visited was the Water Temple where Hindu worshipers come from all over to bathe in the hot spring water the it jetted out of these stone carvings to the left. I opted to stay dry but enjoyed the sight nonetheless. I'm not sure if all the temples is how Bali got the nickname "Island of the Gods" or if it was the cloud capped peaks of all the volcanoes on the island. Overlooking the newest lava flows (early 1900's) and the beautiful crater lakes could definitely inspire a little religion. 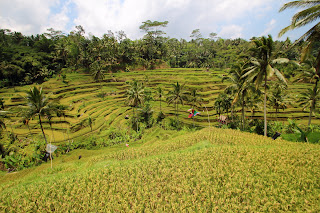 One region that I really wanted to see was where rice is farmed on the steep hillsides in beautiful terraced gardens. We found these not far out of Ubud, Bali which seems to be the cultural center of the island. There were little covered tables set on the hillside overlooking these terraces in case you wanted to enjoy a cold drink while drinking in the view. I could have wandered these hills the entire day. 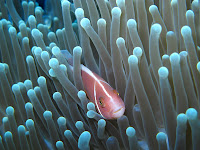 One of the most famous scuba dive sights on the island of Bali, Indonesia is a huge shipwreck called the USS Liberty. I remembered these WWII Liberty ships being built in several shipyards near where I grew up in Savannah and Brunswick, GA. So I looked more into this wreck to see if I possibly came from the same place halfway around the world and what I found was very interesting. In fact the USS part of the name is a common misconception. It should be USAT Liberty. This stands for U.S. Army Transport. She was built in Kearny, N.J. in 1918 for WWI and then survived until an ill fated day in 1942 during WWII when she was torpedoed by the Japanese submarine I-166 while transporting railway parts and rubber. Other boats tried to help tow the damaged Liberty back to shore but eventually had to be beached at Tulamben, Bali. Not finished moving yet, a 1963 volcanic eruptions moved the ship off the beach into the water about 25 meters offshore. Thus making one of the biggest, shallowest, and easily accessible shipwrecks for scuba divers. Now during high season there can be over 100 divers at this sight per day! 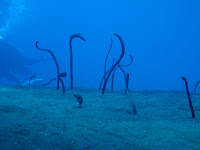 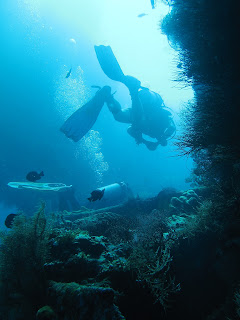 Luckily this wasn't high season. The water was a balmy 80 degrees and beautiful. I went with a scuba outfit out of Sanur called Go Blue Diving. The drive was about 2 hours because of the incessant traffic here in Bali but the two dives we did on the wreck made it totally worth it. I would definitely do it again. Tons of fish, soft coral of all colors, invertebrates like nudibranchs and sea stars, blue spotted rays, scorpionfish, and even a little pygmy sea horse all greeted us underwater. Seeing black coral in 20ft of water and garden eels in 10ft shocked me even more. You have to dive pretty deep in Hawaii to find either. 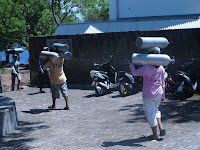 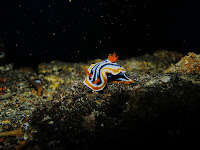 The porters that carried the tanks down were almost as incredible as the animals we found soon after. Check out the guy carrying 3 full scuba tanks and the woman carrying one on her head....with no hands1! 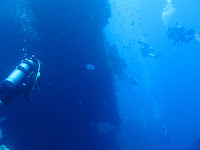 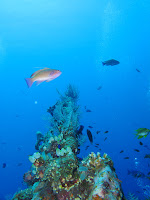 The wreck itself was massive. The ship was originally 411ft and now it has broken up just a bit so the distance is even greater from bow to stern. It is incredible close to shore making it a very easy kick out but the most amazing part is the slope it rest on is quite steep so you can be exploring the wreck down at 90ft all the way up to about 5ft at low tide! You could dive all day on the one wreck and not do the same thing twice. 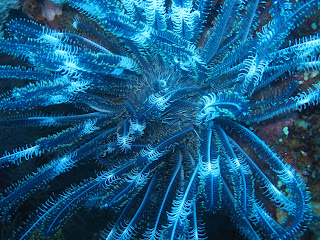 South of Bali on Motorbike: Beaches, Monkeys, and Waves 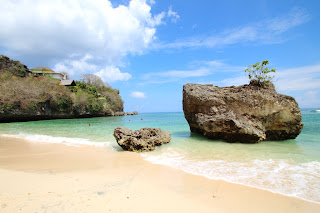 Renting a motorbike for $4 a day and driving to all the surfing beaches of Bali on about 50 cents of fuel is definitely the way to go...as long as you can figure out the crazy, and I mean crazy driving in Indonesia. It seems the motorbikes have no rules and the cars feel ownership of the road feeling free to pass a slower car going into the oncoming traffic lane as long as there are only motorbikes coming the other way...they will get out of the way. Luckily I've seen Captain Ron a few times so I know a little bit about this.

Once you get south of the airport the traffic thins enough to allow you some pretty spectacular views. Famous surf breaks like Bingin, Dreamland, Padang Padang, and Uluwatu are yours for the exploring. Although as I found out this day you may have

to share them with some of the local wildlife like these monkeys. They were searching the intertidal cave for barnacles and crabs. I tried to help them find some barnacles until three particular nasty ones barred their teeth and charge a bit. 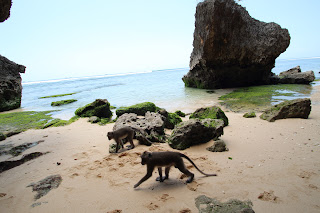