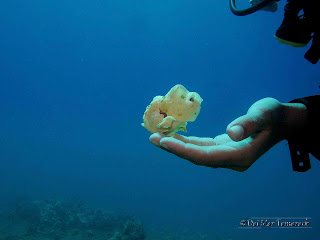 I found this juvenile frogfish while diving at Ukumehame looking for manta rays. The topography and coral aren't too amazing at this sight and since we didn't find any mantas this little frogfish really stole the show.
After spotting him camouflaging in with some yellow coral and snapping a few pics, Heidi put her hand in front of him and he plopped right onto it. But after a few moments the little frogfish started jetting forward by sucking in water and pushing it out of these little holes towards its backside. 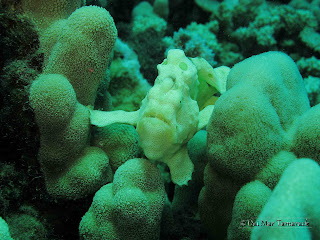 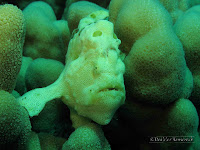 Heidi could feel the jets of water against her hand as the frogfish hovered just above it. The fins on a frogfish are much more rigid than other fish so it has devised an entirely different way to catapult itself around with this jet propulsion. It is very similar to how octopus and squid move. 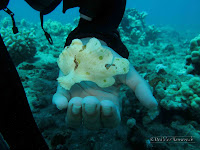 Even thought they swim very slowly, frogfish boast one of the fastest movements of any animal. They are an ambush predator and can swallow prey up faster than you can blink an eye. You can imagine how this big frowning mouth opening up could be a pretty scary sight. I could tell that Heidi was a little worried for her fingers at first. In the pictures below you can see the frogfish on his perch right before setting off on his blue water swim. It was pretty amazing to see him swimming forward without moving his fins. I'm pretty sure after this experience Heidi wanted to take him home for our new pet. 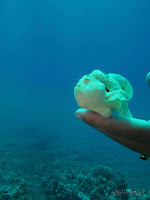 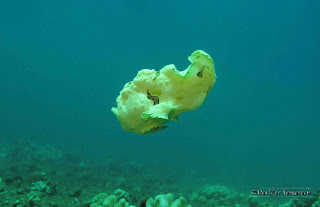