The summer swells are finally here. The same swell that lit up Cloudbreak thousands of miles away reached our shores here in Maui last week. The west side lit up with overhead glassy surf while the south side remained a bit shadowed. Occaisionally a big set would slip through the shadow zone and rumble into a few select south shore breaks so this is where Ben, Heidi, and I headed to avoid the masses. Ben and I had surf boards all waxed up and ready to ride, while Heidi had her favorite long zoom lens outfitted on her DSLR camera ready to catch the action. Sometimes being a surf photographer can be a lot of waiting but luckily Ben and I kept the action coming for her by catching lots of waves.

It was a fun day with lots of head high sets coming in. Not too many people were out. Ben definitely got the wipeout of the day with his casting the board aside nose first entry down the face of a set wave. 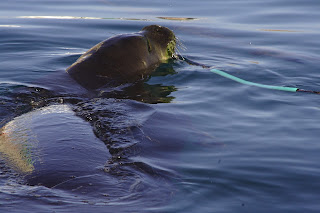 Of all the animals that make their way out to these isolated islands of Hawaii none may be more surprising than the monk seal. Only three types of monk seals are known, the Hawaiian, the Mediterranean, and the Caribbean. It is the only seal native to Hawaii and one of only two endemic species of mammals here. It is also critically endangered. Only about 1,800 of these seals are still alive, with most habituating the Northwest Hawaiian Islands. Conservation is of extreme importance for these seals as we have already witnessed the extinction of the Caribbean monk seal.
Human encroachment, disease, past hunting for skins, and a genetic bottleneck are all against these playful animals. I rarely get to see one here in Maui. In fact it's so rare that when we spot one there is a special hotline to call to report the sighting so volunteers can rush out and make sure the animal is not disturbed.  The monk seal in the picture however was making that very hard as she spent the morning in Lahaina harbor. I watched for a while as she bumped against the dinghies and played with various lines dangling in the water. Hopefully we will be able to see these monk seals for all generations to come.
Posted by Dai Mar Tamarack at 10:41:00 AM No comments: 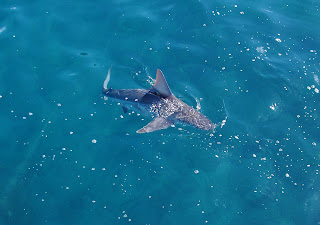 This is my first time seeing a sandbar shark, Carcharhinus plumbeus, in the wild. It is a type of requiem shark distinguished by its very tall dorsal fin. This morning there were two swimming by the fuel dock just inside Lahaina Harbor. I imagine it is fish parts tossed over by the fishing boats that must have brought them in. I have snorkeled all over this island and have never seen them. I have heard stories about people seeing sandbar shark during blue water swims while in hundreds of feet of water. As you can imagine I was very surprised but figured it was a good way to start the day!
Posted by Dai Mar Tamarack at 2:49:00 PM No comments: 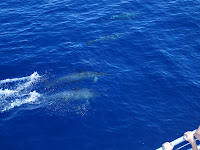 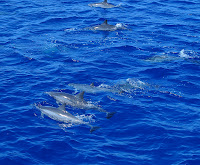 Wild dolphin search is a great name for this trip out of Lahaina, Maui. With all kinds of different dolphins species around but also with no telling where and when you might see them it can be a wonderful experience for all, although a bit stressful for the captain if the dolphins are being extra elusive. On our last trip that I drove we lucked out. We found the dolphins after only 26 minutes of searching and we found lots of them. About 150 spinner dolphins racing across the channel between Maui and Lana'i. The wind backed off and the sun was shining giving us perfect conditions to see dolphins above and below the water racing alongside the boat. The water was clear and glassy as we spent a good hour and fifteen minutes during two different encounters with this large pod.
Sometimes I get high school kids on board that are interested in Marine Biology and I tell them that throughout their studies people will try to dissuade them and say its not really playing with dolphins like you think, its all computer models and micro biology nowadays. Those people are the ones I like to send these pictures to the most. Like most things in life it really is what you make it. 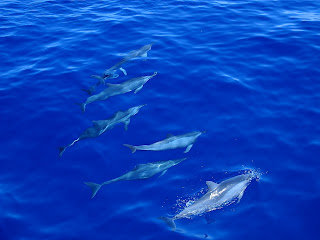 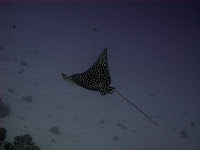 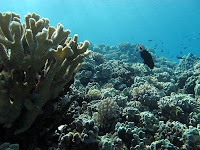 I always tell people that snorkeling is your window to a whole new world, and scuba diving is your door... You can walk through it, immerse yourself, even allow the timid and wary sea creatures a chance to get acclimated to your presence. For an underwater photographer it opens all kinds of doors. Not to mention scuba allows you to go deeper, for longer. At a place like Molokini the freedom to explore deeper opens alot of options.
Today I headed out to Molokini by kayak, surrounded by smooth glassy water only broken by the ripples made by surfacing bottlenose dolphins. The crater itself (Molokini is a partially submerged volcanic crater/ pressure vent) was crowded with snorkel boats. Very few people ever venture out to the crater on their own because its about 3 1/2 miles offshore from he nearest point on Maui. 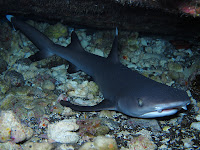 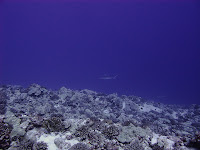 Dropping down one of the edges of the crater I could see the bottom from 150ft away. As I quickly drifted lower and lower I spied spotted eagle rays flying out in the blue and even one above me, silhouetted by the sun. As I hit my deepest depth around 130ft I could see two grey reef sharks working the strong current even lower on the reef. Unfortunately they didn't get closer so this one far off picture was all I could capture. An encounter with a young white tip reef shark would prove much closer though as you can see here to the right. 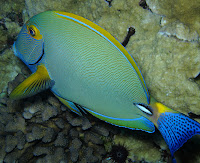 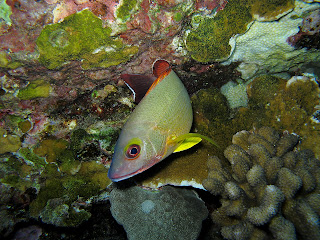 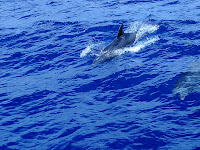 It has been a week of dolphins here in Maui. Today on our Molokini Wild Side trip we spotted a group of about 10 bottlenose dolphins. A few were eager to come check out the boat and even do a little bowriding. I tried to get some research photographs to ID the individual dolphins by getting close ups of their dorsal fins. You can see the dolphin in the top photo has a big chunk missing from the tip of its fin. This is a feature that will make him easy to match up to our catalog of bottlenose that frequent these Maui waters.
Posted by Dai Mar Tamarack at 7:31:00 PM No comments: 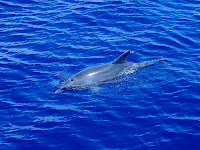 I try to get in as many adventures as I can during my off time. However, many times my 'on-time' is an adventure in itself. Yesterday I was captain for a wild dolphin safari. This is a three hour tour, (how many of you are humming Gilligan's Island), where we head out wherever the best chance of seeing dolphins might be. Today we headed out to the island of Lana'i which is about 9 miles away from Maui, across the Au'Au Channel.
Luckily the trade winds had died down just enough today for their to be a little wind shadow off the west coast of Maui. Lately the winds have been so strong that my trips have mine as well been admission to a water park. Not to mention that rough seas can make spotting dolphins tougher. As you can see from the pictures we found dolphins today in glassy, clear water. This is great for picture taking. You can follow along as they swim underwater and see when they are about to come up for air. 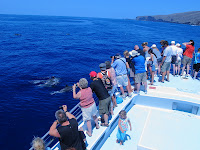 The first group of dolphins we came across were bottlenose dolphins. They travel in small pods here in Hawaii and have vast ranges. They are easy to differentiate from the other common dolphins sighted here because they are nearly twice the size. Hawaiian spinner dolphins are the other commonly seen dolphins species and it is this kind that we spotted next. 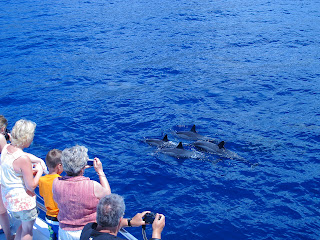 With leaping spins and amazing acrobatics I can sometimes tell what species a spinner dolphin is from far away. Also the size, coloration, and triangular dorsal fin give it away once you are a little closer. They also tend to stay in very large pods, up to 300 strong. Being about half the size of bottlenose it may be for their own protection that they stay in such large groups. They hunt by night and sleep by day. But being air breathing mammals they must keep half their brain on in order to continue surfacing and breathing while resting, otherwise they would drown.
On such a calm day and in such beautiful blue water I had to take a moment to snap a couple of pics from the bridge. Hawaii is a magical place.
Posted by Dai Mar Tamarack at 11:02:00 PM No comments: